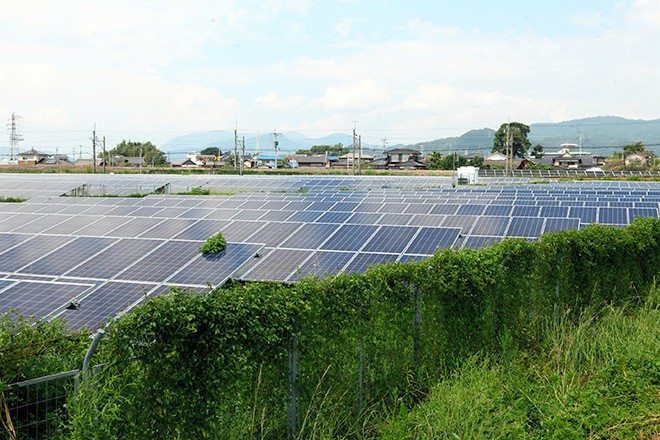 A solar power farm built in Asakura, Fukuoka Prefecture, by a Japanese company that is effectively managed by a Chinese individual. (Hiroshi Nakano)

A Chinese trading company and its four affiliates in Japan hid 3 billion yen ($28.9 million) in income over four years through 2018 by exploiting Japan’s feed-in tariff system for renewables to rake in huge profits, sources said.

The companies involved in solar power generation amended their tax reports after tax authorities in Tokyo and Fukuoka ordered them to pay 600 million yen in back taxes together, including additional penalty taxes, according to the sources.

Of the 3 billion yen in income that the companies had failed to report, the investigation revealed that about 1.9 billion yen was taxable.

The companies were effectively managed by a single Chinese individual.

Shanghai Merchant Tech collected funds in China, where it was also able to purchase solar panels cheaply and sent them to the four companies based in Fukuoka and Shizuoka through the former’s arm in Yokohama.

The four companies reaped huge profits from sales of electric power generated at their solar power farms in western Japan and elsewhere, as well as sales of the right to sell electricity to a utility.

Based on how they gained revenue, tax authorities concluded that Shanghai Merchant Tech is running a business in Japan in real terms and that its Japanese arm is a “permanent establishment” liable for tax purposes.

Asahi International falsely described its repayment of debt to Shanghai Merchant Tech as funds to purchase solar panels. By doing so, it inflated its expenses to make its income look smaller than it was, according to the sources.

Munakata Integrated Development did not list about 4.4 billion yen in revenue from the sale of its solar power farms to other companies in its tax report, hiding around 1.1 billion yen in income.

In an interview with The Asahi Shimbun, the Chinese operator said through a representative that he has amended the tax return and paid all the money he owed.

The feed-in tariff system was introduced in 2012 to promote the supply of renewables when the Democratic Party of Japan was in power.

Under the system, a renewable energy producer was allowed to obtain the right to sell electricity to a utility at a fixed price and fixed term guaranteed by the government.

Although the tariff began dropping with each passing year, those who joined the government program early on, such as the Chinese-affiliated companies, benefited handsomely from this arrangement.

Asahi International established a power plant in Asakura, Fukuoka Prefecture, around 2014, when the tariff was a lot higher than it is now.

The Japanese government set high tariffs for renewables, compared with other countries, to ensure operators benefitted financially as the construction of power plants was a costly undertaking, according to Masafumi Yamaguchi, professor emeritus of solar energy at Toyota Technological Institute in Nagoya.

In contrast, there was a surplus of solar panels in the Chinese market after the government pushed their production.

For Chinese businesses able to acquire solar panels on the cheap, Japan offered attractive pickings due to its geographical proximity, high tariff and large market.

Many of the beneficiaries of Japan’s feed-in tariff system are foreign-affiliated businesses, including Chinese.

But the number of new entrants has dwindled in recent years as the tariffs for renewables were scaled back.