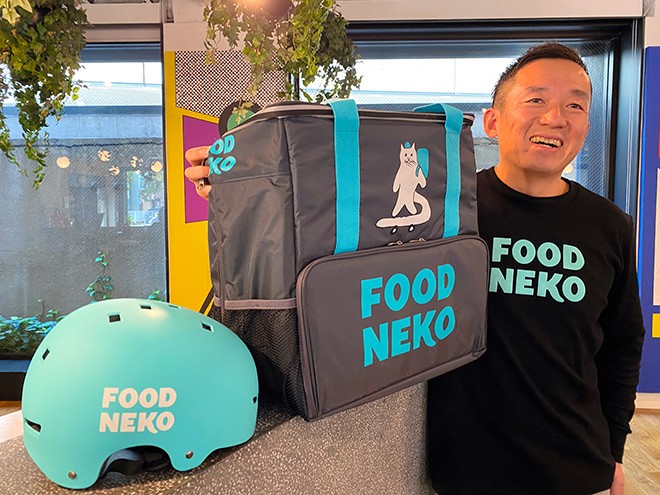 Kazuhito Tsumo, an executive with Woowa Brothers Japan, shows off the bags to be used by delivery riders for Food Neko. (Erika Toh)

The latest entry into the food delivery business in Japan vowed to take measures to protect its cyclists and prevent the types of complaints about abuse and isolation that have plagued Uber Eats.

Food Neko, which began providing its services in Shibuya, Minato and Shinjuku wards of Tokyo on Dec. 8, will employ workers at company headquarters tasked with communicating with riders and listening to their requests.

Delivery workers are regarded as sole proprietors and have no employment relationship with the company they deliver food products for.

That relationship has led to criticism about unfair labor practices, including at Uber Eats, a pioneer of sorts in food delivery.

Food Neko is operated by Woowa Brothers Japan Corp. The parent company runs the largest food delivery company in South Korea. The Japanese subsidiary hopes to expand to all 23 Tokyo wards by the end of next year.

“For platform companies, delivery workers are also service users,” Kazuhito Tsumo, 47, an executive with the Japanese arm of Woowa Brothers, said. “We will emphasize dialogue because there is a need to turn our company into a brand known for face-to-face communications with our delivery workers.”

Employees will use communication apps to remain in touch with the riders.

In addition, a bicycle rider center has been established in the Yoyogi district of Tokyo where training sessions can be conducted. The center will also be used so riders can get to know each other better or to take a break.

According to Oh Hak-soo, a research director at the Japan Institute for Labor Policy and Training who is knowledgeable about labor matters in South Korea, Woowa Brothers this autumn signed an agreement with the company’s rider labor union that included special incentives and subsidies for health checks.

Tsumo said the Japanese arm would enter into collective bargaining if the labor union asked for it. He added that Food Neko would also change current business practices to reduce the burden on both restaurants and those ordering takeout delivery services.