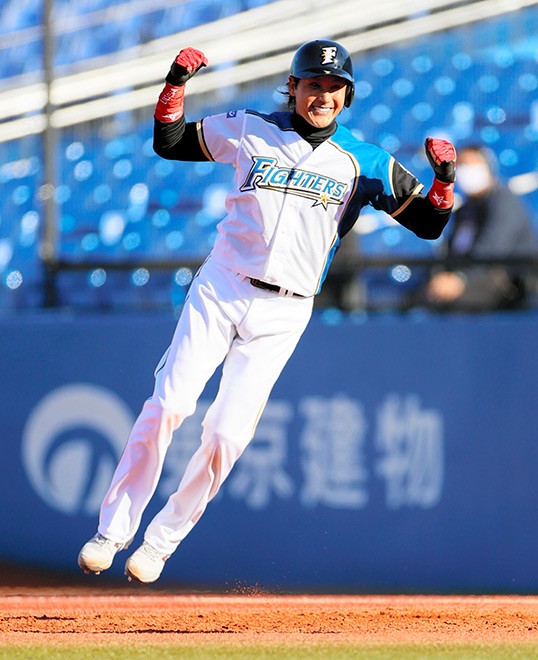 Former outfielder Tsuyoshi Shinjo jumps for joy after making a hit during his final at-bat at a professional baseball tryout on Dec. 7. (Tsubasa Setoguchi)

Former outfielder and major leaguer Tsuyoshi Shinjo proved a real showstopper on Dec. 7 with his first run-scoring hit since retirement 14 years ago in an attempt at a comeback.

Shinjo, 48, also well-known as an entertainer, previously played in Nippon Professional Baseball (NPB) and for the New York Mets and San Francisco Giants.  He joined Hokkaido Nippon-Ham Fighters before retiring as a pro player in 2006.

He was among 56 players who took part in the joint tryout, conducted by all 12 NPB teams in Tokyo in a practice simulating a real game. Participants included players released from professional clubs.

As he did during his professional career, Shinjo stole the show at the tryout.

“I think I was able to supply a little bit of courage to everyone by showing that I’ve made every effort to come this far at the age of 48,” said Shinjo, who has maintained a trim build.

Rather than assuming his familiar outfielder position, in the first fielding practice, he demonstrated his signature strong arms at third base.

The high point came during the fourth at-bat with no hits and one walk.

As he stepped into batter’s box with runners at first and second base, Shinjo said his mind went blank, including how to hit the ball, except for his determination to show what he could do.

He first fouled off a first-pitch fastball. But on the second pitch, he hit a low, breaking ball that shot through a gap between third and the shortstop for his first run-scoring hit since retirement.

“I love (scoring) chances very much,” he said, flashing a big grin.

Though his attempt to make a comeback after a 14-year hiatus appeared reckless to many, Shinjo is very earnest about it.

He started training by throwing a baseball against a wall by himself a year ago, when he was living in Bali. After returning to Japan this summer, he began working full-time with a trainer and training partners.

At first, his trainer was doubtful Shinjo would be able to resume his professional career, but the player won him over.

“He gets better day by day,” the trainer said. “He has an uncanny knack for playing baseball.”

During training, Shinjo also worked on stretching exercises, which he never did during his professional career, according to a training partner.

As a result, his muscles around the hip joint and shoulder blades became more flexible than when he was a pro, the training partner said.

The improved flexibility allowed Shinjo to wow other players when he threw a ball from third base at the tryout.

His powerful performance made it clear that when it comes to making dreams come true, age really doesn't matter.