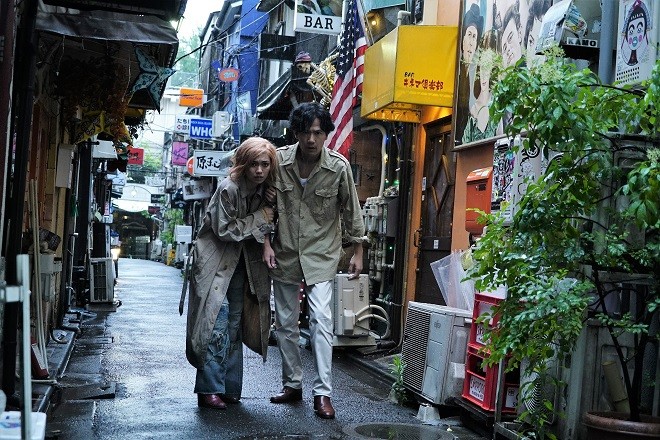 Director Makoto Tezuka accepted the risky challenge of adapting what is perhaps his famous father's most peculiar manga, a piece so personal that likely only the man who wrote it truly grasped its meaning.

Based on "Barubora" by Osamu Tezuka, aka the "god of manga," "Tezuka's Barbara" is a fantasy riddled with decadence.

"I think this was the only manga that my father had trouble in creating," the director said. "In a positive sense, its instability is all the more reason for it to be strangely appealing."

The story begins when novelist Mikura (Goro Inagaki) meets Barbara (Fumi Nikaido), a vagabond whom he describes as "a woman who is like an excrement discharged after a city swallowed and digested several tens of millions of people."

Barbara is freewheeling and self-degrading, but for Mikura, she is a muse who inspires creativity and someone who can save him from illusions caused by hypersexuality.

The film continues to portray Mikura's madness and his road to perdition as he becomes unable to live without Barbara.

The original manga ran in the Big Comic manga anthology for adults from 1973 to 1974 when the director was 11 years old.

"It felt like it was a mixture of parts reflecting real society and an otherworldly, mysterious place," the director recalled. "It had bothered me all these years because it is his only work where he tried to express decadence."

Tezuka first thought about making a film based on the manga five years ago.

"It required actors who could blend into this universe, and I let many years pass by as I couldn't find them," he said.

Part of the reason he had trouble finding people to star in the film was due to its sexual explicitness, which earned it an R15+ rating.

But the project finally came to fruition "in the best conditions possible" after Nikaido and Inagaki said they were willing to do it.

The film's imagery, which captures the streets and hustle-bustle of Tokyo's Shinjuku district is interwoven with sounds from China, New York and elsewhere across the world, transporting the audience into a place between reality and a different world.

Tezuka told Doyle he wanted to tell a love story of a man and a woman set in a dark world. The pair held discussion after discussion while on set and later at a studio in Berlin where they worked to finish the film.

Tezuka, who calls himself a "visualist," lives up to that moniker in his latest project, which besides its love story plot, also tackles questions about art and expression.

To express his unique worldview, Tezuka makes heavy use of black-and-white imagery. What he seeks in cinema, he said, is "visual ecstasy."

"I hope I can offer an experience that's spiritually different by having (the audience) not only feel good but also immerse themselves in the visual world," the director said.