Flareup feared in South China Sea due to power vacuum in U.S. 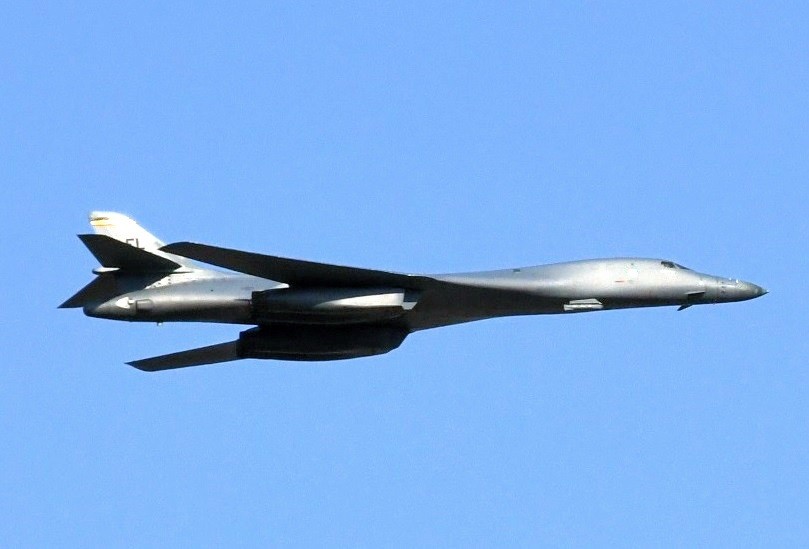 Around the time Joe Biden was giving his victory speech in Delaware as U.S. president-elect on Nov. 8, two B-1B strategic bombers took off from Andersen U.S. Air Force Base in Guam and set a course for the South China Sea.

The aircraft subsequently flew over the Bashi Channel between Y'Ami Island in the Philippines and Taiwan's Orchid Island, then cut across the South China Sea from north to south, according to an official with U.S. Forces in Japan.

“The United States conducted this operation to warn China not to take any provocative action against the United States and its allies during this political transition period,” a White House official told The Asahi Shimbun via video conference.

There were fears of a prolonged power vacuum in the United States after President Donald Trump contested the election outcome, which officials feared could affect the balance of power between U.S. and Chinese armed forces deployed in the region.

U.S. officials had reason to be alarmed, given that four months after the U.S. presidential election of 2000 a Chinese fighter jet collided with a U.S. reconnaissance aircraft over the South China Sea.

At the time, the United States was embroiled in a voter recount issue that was settled 36 days after voting day when Al Gore was forced to concede to George W. Bush despite having won a majority of votes.

This time around, Washington, along with the Pentagon, felt unnerved by the political instability arising from the Trump camp’s refusal to accept defeat and heightened military tension areas around China.

The United States sent only two aircraft carriers to the area during the Taiwan Strait Crisis of the mid-1990s, when ties between Washington and Beijing were at their most tense level since they established diplomatic relations in 1979.

China, for its part, also carried out its own military drills in adjacent waters.

“Military tensions between the United States and China are at their most highly charged since the Cold War ended,” observed Katsutoshi Kawano, former chief of staff of the Joint Staff with Japan’s Self-Defense Forces. “An accidental military encounter was a real fear.”

The Trump administration’s closer relationship with Taiwan was among the triggers for the latest rise in tensions although the back story is more complicated.

Under President Xi Jinping, China embarked on a progressive military buildup. One of the hallmarks was to establish the Strategic Support Force to give it control of cyberspace and outer space as well as the Rocket Force, which has overall responsibility for launching ballistic missiles.

“The electronic warfare and antisatellite capabilities of the People’s Liberation Army have already overtaken the United States,” a U.S. military official said.

Alarmed by the development, the U.S. Defense Department defined China as a “strategic competitor” in the National Defense Strategy it released in January 2018.

“China and the PLA are by far the most significant threat to America’s interests, primarily its alliance and partnership architecture,” Elbridge Colby, lead official on the document's wording when he was deputy assistant secretary of defense for strategy, told The Asahi Shimbun. “We developed this NDS to prevent China from becoming the hegemonial power in Asia.”

A similar understanding is broadly shared within the U.S. military establishment, Congress and other arms of the U.S. government, and it seems unlikely that perception will change just because of a change of government.

China is well aware of that.

John Mearsheimer, a professor of international politics with the University of Chicago, met with several senior Chinese Foreign Ministry officials during a visit to China in October 2019 and came away with a disturbing thought.

“Almost everyone I talked to believes that it doesn’t matter whether Trump wins or loses in 2020 in terms of U.S.-China relations,” Mearsheimer said. “The Chinese believe that the Americans have their sights set on and guns aimed at China, and nothing’s going to change that.”

Biden and several dozen members of his transition team held a teleconference on the evening of Oct. 31, immediately ahead of voting day.

“We can more effectively deal with China by working closely with our allies: Japan, (South) Korea and Australia,” a key member of the Democratic Party who attended the conference quoted Biden as saying.

The Trump administration strained relations with U.S. allies by exerting pressure on them to increase their host nation support for the U.S. military. Biden is hoping to reverse the trend.

Apparently in line with that stance, Biden reconfirmed with Japanese Prime Minister Yoshihide Suga during a phone conversation Nov. 12 that the disputed Senkaku Islands in the East China Sea are covered by Article 5 of the Japan-U.S. Security Treaty.

The uninhabited islets administered by Japan are claimed by China, which calls them the Diaoyu Islands. Article 5 obliges the United States to defend Japan in the event of an armed attack.

Biden's reassurance was in sharp contrast to his stance in December 2013 when he visited Japan as vice president in the Obama administration. At that time, Biden did not call on China to retract its air defense identification zone that Beijing had just established in the East China Sea. Nor did he state that the Senkaku Islands are covered by the Japan-U.S. Security Treaty.

Both the U.S. perception of China and Biden’s personal viewpoint have changed significantly since that time.

There is, however, no clear blueprint yet for the security policy the incoming Biden administration will espouse. The president-elect has listed priority issues for his new administration, such as overcoming the COVID-19 pandemic, rebuilding the economy, and mending racial and social divides exacerbated by Trump.

The United States has a lot on its plate right now, forcing Biden in the near-term at least to focus on domestic issues.

Biden’s encouraging comments on prioritizing alliance commitments does not necessarily mean that Washington will return to the security policy followed by President Barack Obama and earlier administrations.

Given China’s military rise, Biden may call on U.S. allies to step up and take on a greater role than under the Trump administration, sources in the Democratic Party said.