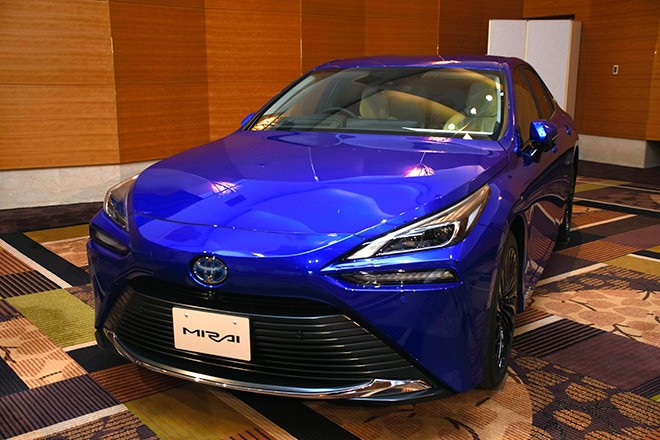 Toyota Motor Corp. put a new and improved version of its Mirai fuel cell vehicle on the market  Dec. 9, but it still comes with a major drawback: its hefty 7.1 million yen ($68,000) price tag, taxes included.

It is the first full model revamp of the Mirai since the original hit the market in 2014.

But the minimum price for the new Mirai is only about 300,000 yen cheaper than the original model.

Worldwide, about 11,000 Mirai cars have been purchased, but only about 3,700 sold in Japan. That figure is less than one-tenth of the government’s goal to have 40,000 fuel cell vehicles on Japanese roads in 2020.

Yoshikazu Tanaka, the Toyota chief engineer involved in developing the Mirai, said the company hoped to lure buyers because of important improvements in the new version.

“We have bolstered its attractiveness by increasing the hydrogen fuel capacity, extending the driving range and strengthening the engine power,” he said.

The Mirai uses hydrogen for fuel and runs on electricity generated through the chemical reaction between the hydrogen and oxygen in the air. It does not emit any carbon dioxide, a key factor in global warming, and only produces water and air in emissions.

The new model has a greater hydrogen tank capacity of 5.6 kilograms, compared with 4.6 kg for the old model. That allows it to run up to about 850 kilometers, a 30-percent increase in its driving range over the old model’s range of 650 km. That means the new Mirai can be driven from Tokyo to Hiroshima without refueling.

The new model also comes equipped with two filters that remove dust and chemical elements from the air and release cleaner air into the atmosphere. An onboard monitor allows the driver to check how much cleaner the air is when it gets released.

While the cheapest version of the new Mirai is less expensive than the original version, the price for a standard model is 7.35 million yen, while one with all the options included will cost 8.05 million yen.

The government provides a subsidy of about 1.17 million yen to anyone purchasing a fuel cell vehicle, but the discounted price is still higher than Toyota’s high-end Crown model.

Promoting the spread of fuel cell vehicles is viewed as key to the government’s pledge to achieve net zero greenhouse gas emissions by 2050.

While the high price raises questions about the vehicle’s future, the company is betting the new Mirai will play a big role in popularizing fuel cell vehicles.

Masahiko Maeda, Toyota’s chief technology officer, said it will serve as a “starting point for the full-fledged spread of hydrogen vehicles.”

(This article was written by Takuro Chiba and Jumpei Miura.)