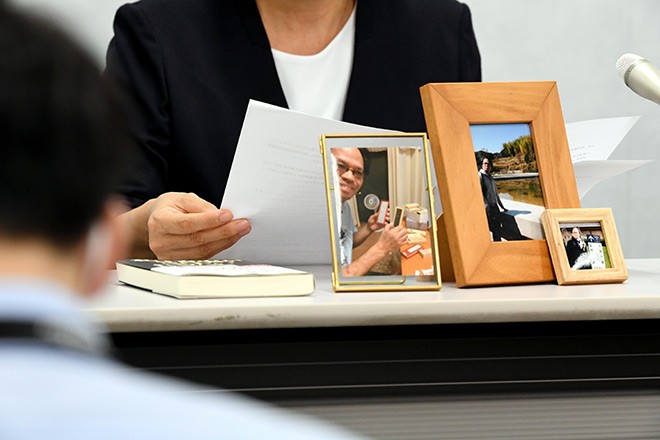 With a picture of her late husband, Masako Akagi speaks at a news conference in August after the first hearing of her lawsuit against the government over his death. (Asahi Shimbun file photo)

Lawyers representing the wife of a Finance Ministry employee who killed himself accused the government of providing misleading information about his death and why he falsified records about the dodgy sale of state-owned land.

They said recently disclosed government documents run counter to the facts and what the husband had written in his suicide notes.

For example, the lawyers said the government’s documents did not mention that a superior had ordered the husband, Toshio Akagi, to falsify records on negotiations of the land deal. In fact, the documents did not even say that he was involved in the falsifications.

“The stark lack of the references goes against the facts,” Tadashi Matsumaru, one of the lawyers for the widow, Masako Akagi, 49, said.

Masako Akagi in March sued the central government and a former senior ministry official who oversaw sales of state assets at the Osaka District Court, demanding 112 million yen ($1.04 million) in compensation for her husband’s death.

She argues that Toshio, who worked for the Kinki Local Finance Bureau, took his life as a result of being forced to doctor ministry records.

The documents, covering 568 pages and released on Dec. 7, concerned the government’s decision to recognize Toshio’s death in March 2018 as an accident in the line of duty. They were made available through court hearings in the damages suit.

The Kinki Local Finance Bureau sold the land in Osaka Prefecture to Moritomo Gakuen, an Osaka-based private school operator linked to Akie Abe, wife of former Prime Minister Shinzo Abe, in 2016. The price offered was around 800 million yen ($7.7 million) below the estimated rate for the land.

After the land deal became a social issue, Toshio “had to routinely work long hours well into the night to meet disclosure requests for relevant records from members of the Diet and the public,” according to the documents.

“As news media reports on the Finance Ministry’s falsification of official documents and their criticism of the issue became overheated, he was pushed into a mentally tight spot,” they said.

However, in his suicide notes released by Masako this year, Toshio wrote, “I have pondered all along how to take responsibility as an individual who was involved in” the falsifications.

He also wrote, “In the end, an individual at the bottom will be sacrificed.”

The widow in April asked the Kinki Local Finance Bureau to disclose a different set of government documents concerning her husband’s death. But the bureau told her that it would delay a decision on disclosure until May next year, saying it had to deal with a massive volume of documents and the novel coronavirus pandemic.

Akagi, displeased with the bureau’s reply, took her request to the district court as well in July.

In an inquiry by The Asahi Shimbun about why the documents did not mention the falsifications, the Finance Ministry’s public relations office said that answering the question by Dec. 8 would be difficult.

In February 2017, Toshio was forced on several occasions to falsify the official records on the land deal, including deleting references that showed that Moritomo Gakuen was given preferential treatment.

He took a sick leave from the bureau after he was diagnosed with depression in July that year.

He committed suicide on March 7, 2018, five days after the ministry’s falsifications of the land deal documents were first reported in the media.

The government recognized his death as job-related in February 2019.