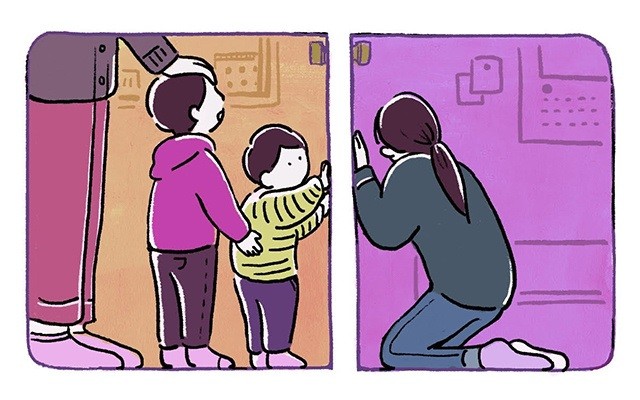 Editor's note: This is the first of a three-part series touching on the experiences of Asahi Shimbun reporter Yuri Imamura who was infected with the novel coronavirus in March. The reporter still experienced symptoms even after being discharged from the hospital. She hopes by sharing her personal account, including the difficulty of quarantining herself from her family, that it will lead to people being more aware of the difficulties of the disease.

The first symptom was a tasteless cup of hot coffee.

As a 37-year-old reporter working at The Asahi Shimbun Tokyo head office, I always start my day with a cup of coffee with my co-workers.

But on March 28, I thought the coffee tasted like hot water. A co-worker who drank the same thing said it was delicious. However, at first, I didn't think my tasteless coffee was a symptom of anything serious.

That day coincidentally was the start of the first weekend for which a request had been made to residents to refrain from going out in the Tokyo metropolitan area.

As a journalist who belongs to the Foreign News Section, I had been reporting about residents of Wuhan, Hubei province, China, starting in late January when novel coronavirus infections spread there.

Due to my knowledge of the virus, I was deeply aware of how easily it can spread and how frightening it can be if severe symptoms develop. I stopped doing in-person interviews from late February and had been working from home as much as possible.

Whenever I went out, I wore my face mask and washed my hands thoroughly.

About two hours after drinking the coffee on March 28, I was sure that something was wrong with my body. When I put an essential oil on my fingers, I should have smelled the lavender aroma, but I couldn't smell anything. I tried disinfectant spray and disinfectant tissues as well, but I wasn't able to smell any alcohol.

There was news just a few days earlier about a professional baseball player who complained that he couldn't smell anything and tested positive for the novel coronavirus.

The doctor said there was little chance that I had a case of COVID-19.

I called my husband, who was at home with our 3-year-old and 1-year-old sons, and told him I couldn’t smell anything.

We considered whether I should stay at a hotel or to go to our parents’ home, but if I was infected with the virus, the latter might make matters worse.

On the way home, I found that a clinic was still open. While I hesitated about going inside, a woman came out and asked me, "Are you OK?"

"I have no fever, but I have no sense of smell or taste," I told her through my face mask and she immediately took one step back.

She then gave me a thermometer and checked my temperature, which was around 36 degrees. I was then given permission to see the doctor.

The doctor's opinion was that he doubted that I had COVID-19 because I only lost my sense of smell and taste.

As a precaution, I asked him if I could have a polymerase chain reaction (PCR) test, but he replied, "The test is not for reassuring people that they don't have the virus."

My fatigue started increasing from March 31. My body felt heavy and it was difficult to even stand up. Although I didn't have a fever or cough, I found that I ran out of breath easily.

I called the official hotline again. The worker said that I should see a doctor first.

My family doctor refused to examine me because she didn't have the proper equipment. She instead wrote me a letter of introduction to another hospital that has a respiratory department.

When I drove my car to the hospital, a male clerk was waiting for me outside in the hospital parking lot and told me, "Our director suspects that you are infected, so don't come inside and please call the hotline."

I called a general hospital near the second hospital and told them about my symptoms. An employee said, "You can't see the doctor because you are most likely infected."

The worker even said I should contact the hotline for permission to take a PCR test even though the hotline instructed me to see a doctor.

I was at a loss of what to do.

I drove to an empty parking lot and I kept calling the public health center from the car. After dialing 134 times, someone finally answered the phone. I then told the person, "I was denied a medical examination at three different hospitals, and one of them told me that I should get a PCR test because they think I am definitely infected."

Finally, the public health center official said, "We will consider giving you a test."

Around the afternoon of the next day, the public health center called to inform me that I could take a PCR test in the evening.

When I went to the designated hospital, the examination area was in a white tent installed near the emergency outpatient entrance. After a brief interview with a doctor wearing a blue protective suit and a face mask, he inserted a long cotton swab into my left nostril and the test was done.

They said the result would be available in about three days.

Once I returned home I immediately took off my clothes and put them into the washing machine. Then I took a shower.

Considering the possibility I was infected, I started isolating myself thoroughly at home. My husband has a chronic illness, and my elder son has weak bronchial tubes so I thought I should stay away from them.

I brought a futon into a small room that I usually use for work and I began my isolation.

When leaving the room for the toilet or to take a shower, I carried a disinfectant spray in my right hand and a towel in my left hand, and wiped whatever I touched--door knobs, refrigerator doors, faucets, toilet seats, toilet wash buttons and light switches.

I used the shower last. I washed my towels and clothes separately from my family's. No matter how cold the day, I opened all the windows to ventilate the whole apartment.

My 3-year-old son and 1-year-old son couldn't understand the reason for self-quarantining even if it was explained to them.

There was no lock in the room I stayed in. My children screamed "Mama" from morning till night, without knowing why their mother suddenly disappeared.

When I tried to go to the bathroom, both of them rushed to hug me when they found me. My husband had to physically pull them away from me. This was repeated many times.

My younger son kept screaming and crying because his mom stopped holding him. My older son made a fearful face because he desperately tried to understand why his parents kept him away from his mother with stern looks on their faces.

When I returned to the room from the toilet, I had to run inside as quickly as I could. I held the door from the inside, shouting, "I'm sorry, I'm sorry" to my children who were trying to enter the room and kept saying, "Open it, Mama."

My younger son stuck his finger in the door to prevent me from closing it. I pushed his small finger back out with my elbow, saying, "Don't come in because I might infect you."

"Your mom is sick," explained my husband, then my elder son just repeated through the door, "Mom, kiss me." He remembered a video he saw on YouTube of a mother kissing a child with a cold.

Suddenly, I realized fully at this moment that this is a very serious situation. No matter how my kids cried and shouted, I couldn't even touch them, let alone kiss them.

While listening to my children screaming outside the door, I repeated, "I'm sorry" and blocked the door with a storage shelf.