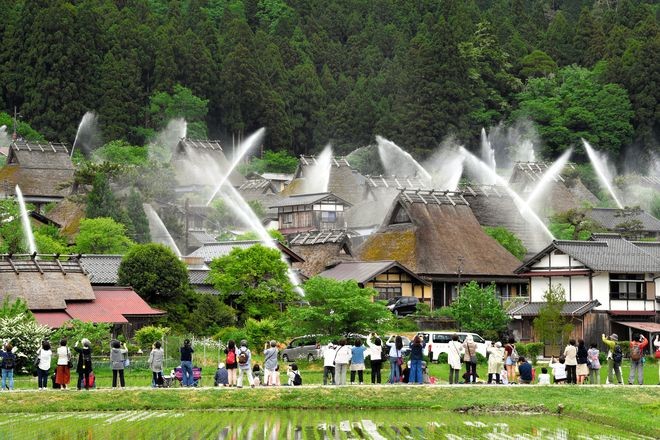 Water is sprayed over thatched houses in a firefighting training exercise held in the Miyamacho district of Nantan, Kyoto Prefecture, in May 2019. (Asahi Shimbun file photo)

True to its moniker, Kayabuki no Sato (Village of thatched roof homes) in Nantan, Kyoto Prefecture, is dotted with old thatched-roof farmhouses that glow gold when the sun is out, and gradually change in color from brown to black after sundown.

I visited the Miyamacho district in Nantan to interview Yuki Tomita, 25, a young woman who moved out of a big city to live in one of those kayabuki farmhouses.

Asked how she was finding her new home, she replied, "I never have to ventilate this place as a protection against coronavirus infection. The house airs itself all day long."

A native of Settsu, Osaka Prefecture, Tomita studied architecture at university. After graduation, she apprenticed for three years at a company in Miyamacho that specialized in kayabuki artisanship. And while learning the trade, she dreamed of living in a kayabuki house someday.

Once she was settled into her dream home, she became aware of the entire structure "breathing" constantly. The pillars and floors, not to mention the roof, were all derived from plants. The air felt entirely different from that of any building made of concrete.

"The home does very well in the rain, snow and heat," Tomita noted. "But you'll have to watch out for fire and wind."

Kayabuki homes could be found in various parts of Japan until the early 20th century, but their numbers plummeted when urbanization rolled in.

Kayabuki artisans also became a dying breed and "kaya" plants became available in limited amounts. Roof replacement, which was once a community project involving all the neighbors, would today cost the homeowner several million yen.

The home Tomita moved into had remained vacant for 25 years, with its roof left unrepaired for quite a while.

At a UNESCO conference to be held in Paris next week, the kayabuki and other traditional construction techniques are expected to be added to the UNESCO list of intangible cultural heritage.

On the day I interviewed Tomita, it rained in Miyamacho. But even when the sky opened up with a vengeance, all I heard in the house was the soothing sound of the rain dripping from the eaves.

That gave me a glimpse, so to speak, of the desirability of the home itself beyond its visual aesthetics.

Kayabuki is definitely an architectural style that needs to be preserved for posterity.