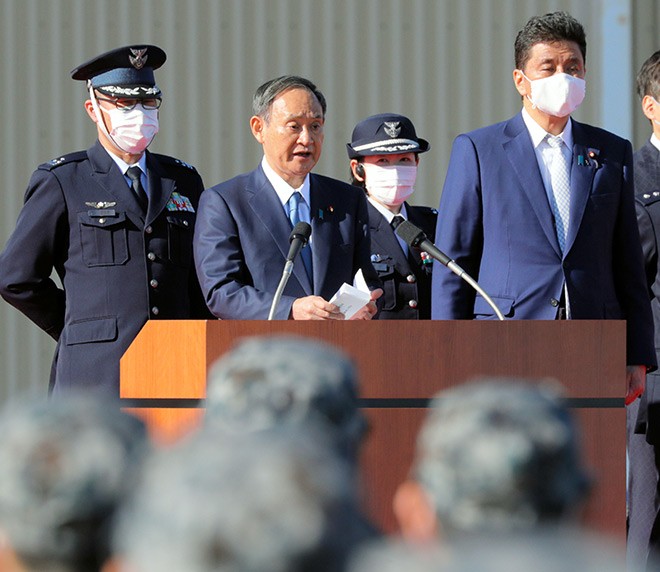 The Suga Cabinet will soon approve a new missile defense policy directive but avoid calling for first-strike capability before ballistic missiles are launched against Japan, several sources within the government and ruling coalition said.

Though Prime Minister Yoshihide Suga will not fully endorse the missile defense directive advocated by his predecessor, Shinzo Abe, the government will stress the importance of strengthening Japan's deterrent capability.

In June, Abe, then prime minister, said a new national security directive was necessary and that discussions should be held on whether Japan should have a first-strike capability against enemy missile bases.

On Sept. 11, shortly before stepping down as prime minister, Abe said he hoped a new missile defense directive could be agreed upon before the end of the year.

But the document the Suga administration will introduce sometime next week will only call for further discussions on strengthening Japan’s deterrence.

While the moves by the Suga administration might appear to be retreating from a more aggressive policy stance, it also has decided to approve development of a cruise missile that would have a longer range than the current surface-to-ship guided missiles in the arsenal of the Self-Defense Forces.

The Defense Ministry plans to include a request of 33.5 billion yen ($321 million) in the fiscal 2021 budget for development of the new longer-range cruise missile. A five-year development period is being envisaged.

While the cruise missile would ostensibly be used to defend outlying islands, it and the JASSM-ER missile being planned for installation on F-15 fighter jets could be converted into missiles capable of striking enemy missile bases.

So while the government may not clearly state its intention of possessing first-strike capability, it will still be moving in a direction of actually possessing such a capability.

The document to be approved by the Suga Cabinet next week will include wording about whether Japan should possess first-strike capability as well as what alternative would be used for the now-scrapped land-based Aegis Ashore missile defense system, according to sources.

But rather than say Japan would possess first-strike capability, the document will likely only touch upon the increasingly serious national security environment, such as the moves in ballistic missile and nuclear weapon development being made by North Korea.

Only calling for further discussions on how to strengthen deterrence is a clear concession to junior coalition partner Komeito, which has long been known as a party with pacifist leanings.

Komeito lawmakers are well aware that a Lower House election could be held within the next year and with a Tokyo metropolitan assembly election scheduled for next year, the party does not want to go along with a missile defense policy directive that could stir up criticism from party supporters.

The Suga administration also faces a dilemma because the ruling Liberal Democratic Party compiled a document in August that called for possessing the capability to stop enemies from launching ballistic missiles from within their territory.

The United States has also been asking allies to shoulder a greater burden for their defense.

For those reasons, a high-ranking government official said the document had to be carefully worded so as not to give the impression that the Suga administration was abandoning plans to possess a first-strike capability.

Thus the inclusion of wording that discussions would continue on how to strengthen deterrence.

Not including a deadline for such discussions would also give the Suga administration a freer hand in how such talks progress. That would remove the specter of Abe’s deadline, which may have hastened discussions this time around.