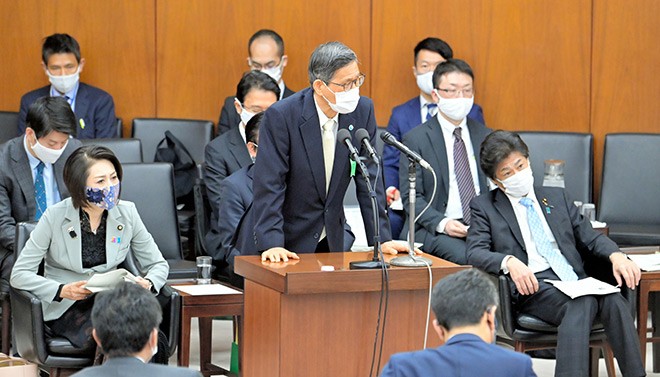 Shigeru Omi, head of the government advisory panel on the coronavirus pandemic, speaks at a session of the Lower House Committee on Health, Labor and Welfare, on Dec. 9. Seen to his right is welfare minister Norihisa Tamura. (Kotaro Ebara)

The chief of a government expert panel on the novel coronavirus said the Go To Travel program should be suspended in large cities where the situation has reached the second most serious level.

Those urban centers would include Tokyo, Osaka, Nagoya and Sapporo.

Countering the policies of the Suga administration, panel leader Shigeru Omi, an infectious disease expert, said on Dec. 9 that all people in those cities, not just senior citizens, should minimize their movements and contact with others.

“The government’s travel campaign will generate more economic benefits and gain broader public support if it fully resumes after we contain the infections to Stage 2,” Omi said at a meeting of the Lower House Committee on Health, Labor and Welfare.

He added that restricting people’s movements and contact in areas with surging numbers of new cases is a “rational option” under global standards on dealing with the pandemic.

Although Japan keeps setting record daily highs for new COVID-19 cases, the government on Dec. 8 decided to extend the Go To Travel campaign until the end of June, beyond the initial deadline of the end of January. The campaign, which subsidizes domestic travel costs, started in the summer to help the hard-hit tourism industry stay afloat.

Omi at the meeting said the government did not seek the panel’s opinion on the continuation of the Go To Travel and Go To Eat dining campaigns.

Health minister Norihisa Tamura defended the government’s decision, saying it does not have to consult with the panel on every single issue.

Omi in late November said the virus situations in Sapporo, Tokyo’s 23 wards, Nagoya and Osaka were at Stage 3 on the government’s four-level criteria. Stage 3 means that infections are rapidly spreading.

Stage 2 indicates a situation in which new cases are increasing gradually.

Following surges in the third wave of infections in the capital, Tokyo Governor Yuriko Koike recommended earlier this month that people aged 65 or older and those with underlying diseases refrain from traveling to or from Tokyo on the Go To Travel campaign.

The central government earlier excluded Osaka and Sapporo from the campaign, but only for trips to the two cities. It has only asked people in the two cities to refrain from using the campaign for outbound travel.

At the Dec. 9 meeting, the government reported that eight cluster infections affecting five or more people occurred among tourists who used the Go To Travel campaign.

According to the transport ministry, which oversees the Go To Travel campaign, as of Dec. 8, 258 tourists who traveled on the program tested positive for the novel coronavirus, while 220 workers at registered hotels were infected.

As for the Go To Eat program, 76 employees at 58 registered restaurants were confirmed infected, according to the agriculture ministry, which oversees the initiative.

A total of 52.6 million people signed up for the discounts offered in the Go To Travel campaign as of Nov. 15, according to the transport ministry.

An online survey conducted by researchers with the University of Tokyo showed that users of the Go To campaigns consistently displayed specific COVID-19 symptoms at a higher rate than people who did not use the programs.

About 28,000 people responded to the monthlong survey that began in late August and asked whether they experienced any symptoms over the last month. Of the respondents, 3,289 said they traveled on the subsidy program.

According to the results, 29.4 percent of campaign participants and 25.5 percent of nonusers complained of headaches.

Twenty percent of the Go To Travel tourists said they had sore throats, compared with 11.3 percent of nonusers.

As for the loss of a sense of smell and taste, 2.6 percent of users and 1.7 percent of nonusers cited that symptom.

However, the survey results do not constitute definitive evidence linking the symptoms with the travel campaign, according to the researchers.

Their findings have yet to undergo a peer review, and some respondents said they already displayed symptoms before they traveled.

Omi also said it is difficult to determine whether the Go To Travel campaign contributed to the spread of infections based on the researchers’ report.

(This story was written by Shuichi Doi and Hajime Mikami.)