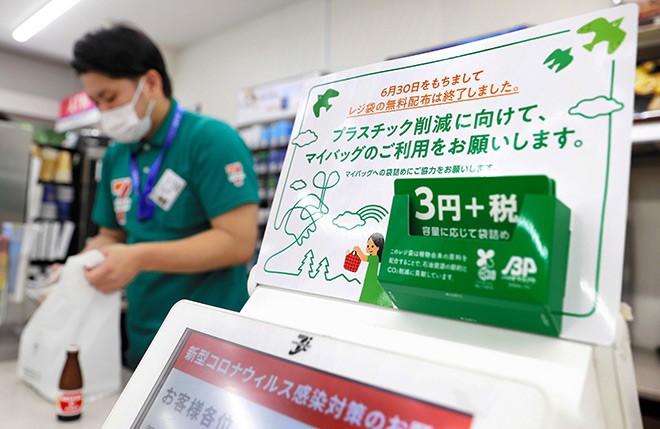 From July 1, all shops in Japan, such as convenience stores, have been required to charge for plastic shopping bags. (Asahi Shimbun file photo)

Japan's campaign to get customers to sack the use of plastic shopping bags by making stores charge for them is working, an Environment Ministry survey showed.

During a single week, 72 percent of respondents declined offers to purchase plastic bags at stores, and 94 percent had their own shopping bags, according to the survey's results announced by the ministry on Dec. 9 at an event in Tokyo.

For the ministry, the statistics came as a pleasant surprise.

“Honestly, I was thinking like, ‘Is it possible?’ But we achieved our goal,” said Yoshihide Hirao, chief of the ministry's recycling promotion section.

In March, just 30 percent of shoppers turned down offers of plastic bags.

The rate of people who declined the bags more than doubled from March after all stores were required to charge fees for them from July 1.

The ministry in late November surveyed approximately 2,000 people online aged 15 to 79, living in Hokkaido, the Kanto and Kyushu regions and elsewhere on their plastic bag use.

Within this year, it had aimed to achieve a refusal rate of 60 percent.

Among people in their 60s or older, 84 percent declined to buy bags. The percentage figure was the highest among all age groups.

On the other hand, the corresponding figure was the lowest among people in their 20s with 57 percent.

Women, on the whole, declined to purchase bags more than men.

People bought plastic bags mainly because they forgot to bring their own or wanted them to use as garbage bags.

Some plastic shopping bags are still provided free of charge, such as ones without handles.

But about half of the respondents said that they wouldn't buy them if they are charged and 52 percent said they carry their own shopping bags all the time.

“Requiring stores to charge for plastic bags has proven quite effective,” a ministry official said.

After stores began charging for the bags, 80 percent of respondents said that their awareness of plastic waste issues had been “heightened.”

The rate also jumped from 30 percent to more than 70 percent after stores started requiring people to pay for the bags, according to a survey on the refusal rate in July by three major convenience store companies.