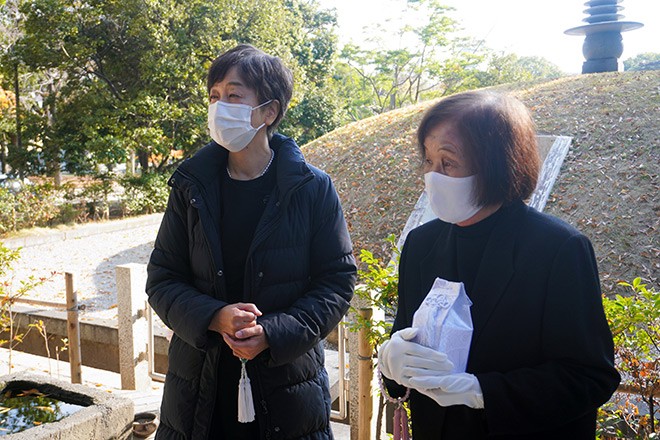 HIROSHIMA--Kiyoko Iwata last saw her older brother when he was heading out to go to war. Then the unthinkable happened.

On Dec. 8, 75 years after her brother was killed by the atomic bombing of Hiroshima, Iwata finally received his remains.

“He must have been feeling sad and in pain for 75 years,” said Iwata, now 83, choking back tears. “I want to say welcome back to him.”

Her brother, Kikuma Michihara, was 18 years old when he died.

The remains of tens of thousands of atomic bombing victims, including ashes that carry names, are still kept in the city because their families cannot be identified.

According to Hiroshima city, Michihara’s remains are the first of an atomic bomb victim since 2017 to be returned to the bereaved family and only the third since 2010.

Hailing from present-day Hatsukaichi, Hiroshima Prefecture, Michihara was deployed to the Chugoku military district’s No. 1 infantry reserves, or the Chugoku No. 104 corps, based in Hiroshima city.

The U.S. atomic bomb detonated over Hiroshima on Aug. 6, 1945, and Michihara died at a hospital in the port district of Ujina in the city on Aug. 31 that year.

His remains were collected by an Imperial Japanese Army’s research team for radiation measuring.

“I saw my brother for the last time when I was an elementary school first-grader and bid him farewell by swinging a Hinomaru flag made of shoji paper,” Iwata said. “My gentle brother loved me, his only sister, so much.”

Iwata rubbed the urn box after receiving it from a city official in front of the memorial tower at Hiroshima Peace Memorial Park with her eldest daughter. It was the 79th anniversary of the beginning of the Pacific War.

Iwata said Michihara’s remains will be placed in the family grave.

Michihara’s ashes were found in 2019 among the possessions of Dr. Yoshio Nishina (1890-1951), who worked at what is now the Riken research institute.

Nishina had visited Hiroshima two days after the atomic bombing as a member of a survey team sent by the Imperial General Headquarters, an organ under the emperor.

The researcher is well known for his contribution to Japan’s atomic bomb development program based on the Imperial Japanese Army’s request.

After Nishina and others concluded the city was ravaged by an atomic bomb, another research team, including scientists from Riken and elsewhere, started collecting the victims’ bones on Aug. 14 for radiation analysis and other purposes.

Staff members sorted Nishina’s belongings in 2019 because the aging former Riken building in Tokyo where his office was located was scheduled to be demolished.

They found seven bone fragments and 21 powdered remain samples in a box with the description “atomic bombing victims’ remains (sampled in Hiroshima).”

The remains were transferred to Hiroshima city in November.

The note appended to the box showed the names of four individuals, including Kikuma Michihara, who was also listed as Kikuo Michihara in a remarks column of the same note.

The municipality examined the family register copy kept by Kikuma Michihara’s relatives, the atomic bomb victim list and a report about the Army Ministry’s radiation analysis of the remains of atomic bomb victims, which was reprinted in a 1972 publication.

The city concluded that the descriptions basically matched those of Kikuma Michihara, although one kanji was different between his real name and the one written in the note.

That led Hiroshima officials to Iwata, who lives in Hatsukaichi.

Hiroshima city officials are soliciting information about Toshiro Kinouchi, another atomic bomb victim whose name is mentioned in the note accompanying the box of returned remains.

The remains of 70,000 people are kept in the atomic bomb victim memorial tower at Hiroshima Peace Memorial Park because their families have yet to be identified.

Every year, Hiroshima city distributes a list of named but non-returned remains of 815 people to municipalities and hibakusha groups nationwide to ask for information.