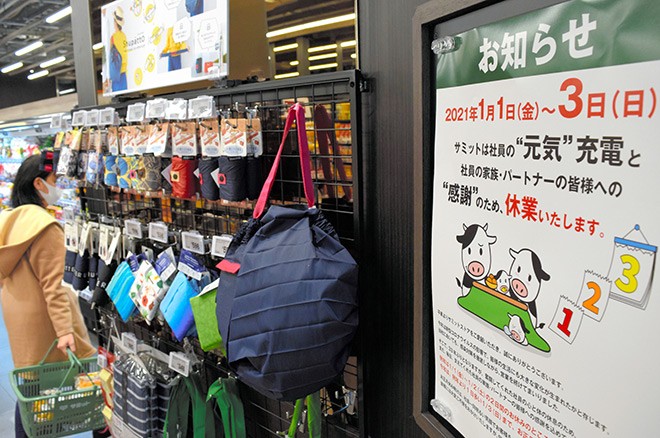 A poster at a supermarket in Tokyo operated by Summit Inc. says it will close during the first three days of the new year. This photo was taken on Dec. 3. (Yoshikatsu Nakajima)

This New Year’s sales season is going to look a lot different from normal under the COVID-19 pandemic, with many supermarkets closing and far fewer lucky bags lining department store shelves.

Summit Inc., which operates food supermarkets in the greater Tokyo metropolitan area, will close 113 stores--almost all its outlets--between Jan. 1 and Jan. 3. It is the first time in 33 years it will close its stores during the period.

The company is calling on customers to buy necessary items in advance, so its outlets do not become overcrowded at year-end.

Yaoko Co., which operates about 170 supermarket stores in the Kanto region, will shut down most of its outlets during the first three days of the new year.

“Our staff kept working hard despite the threat of the novel coronavirus,” said a Yaoko official. “We want them to spend the New Year holidays relaxing.”

Inageya Corp., which operates some 140 supermarkets in Kanto, will only keep some of its stores open during the same period as well.

Department stores are also turning to new ways of offering New Year’s lucky bags to discourage crowds from lining up.

Takashimaya Co., a major department store operator, will not sell lucky bags in its stores on Jan. 2 and Jan. 3, but offer them to those who make reservations by the end of this year or make them available for online sales.

“We need to adopt completely opposite sales strategies from the past,” said Takashimaya President Yoshio Murata. “It’s difficult to keep our customers satisfied while preventing them from flocking to our stores.”

Daimaru Matsuzakaya Department Stores Co., another major department store operator, will also pull lucky bags from store shelves in metropolitan areas, including Tokyo’s Ueno district and Osaka’s Umeda district, on Jan. 2 and Jan. 3. It will offer them well before the start of the new year and then resume sales on Jan. 4.

Some family restaurants will close or cut their operations while others will remain open during the year-end and New Year holidays.

Skylark Holdings Co., which operates the family restaurant chains Gusto and Bamiyan, will shorten hours at its 2,800 or so outlets nationwide during the holiday period. They will close at 6 p.m. on Dec. 31 and open between 11 a.m. and 9 p.m. on Jan. 1.

Royal Host Co., another major family restaurant chain, will shut down most of its outlets on New Year’s Eve and New Year’s Day, the same as last season.

Saizeriya Co. used to close its restaurants on Jan. 1, but it will open many of them on that day in anticipation of growing demand for takeout and deliveries amid the pandemic.

Many convenience stores are likely to remain open during the upcoming holiday season.

Lawson Inc. closed 102 stores during last New Year’s holidays partly due to a labor shortage, but that number will likely drop to meet increasing demand for goods and services suitable for stay-at-home lifestyles.

“Some (franchise) owners said they want to operate their stores (during the season) this time,” said Lawson President Sadanobu Takemasu.

Seven & i Holdings Co., which operates the Seven-Eleven convenience store chain, said it closed 50 outlets that it directly runs on a trial basis during last New Year’s holidays, but has no plans for a repeat this season.

(This article was written by Yoshikatsu Nakajima, Aki Sato and Takumi Wakai.)