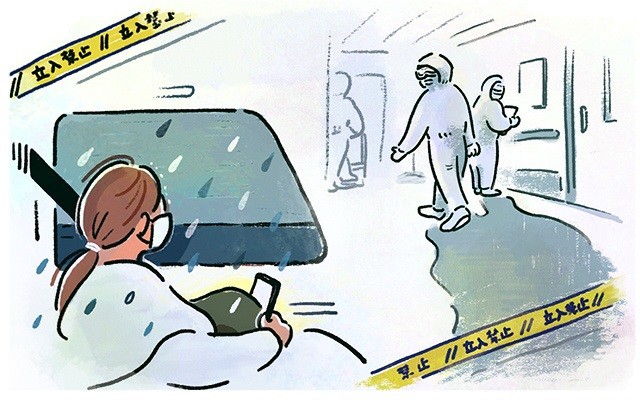 Editor's note: This is the second of a three-part series touching on the experiences of Asahi Shimbun reporter Yuri Imamura who was infected with the novel coronavirus in March. The reporter still experienced symptoms even after being discharged from the hospital. She hopes by sharing her personal account, including the difficulty of quarantining herself from her family, that it will lead to people being more aware of the difficulties of the disease.

The day after I finally got a polymerase chain reaction (PCR) test, my entire body was racked with pain. Countless needles seemed to pierce the muscles inside my body.

Even if I lay down or sat, I felt a sharp pain where my body's weight was pushing against the bed or chair that I was using. So I had no choice but to stand still to limit the affected area of my body.

On April 4, when the daily number of people infected in Tokyo for the first time rose to triple digits, a public health center official called to inform me that I was infected.

But I was shocked by her following words.

"Every hospital is currently full. I'm looking for a vacancy for you, but I don't know when you will be able to be hospitalized. For now, quarantine yourself from your family."

I told her no matter how far I stayed away from my family, my kids still walked and played in the corridor between my room and the bathroom. They played with their toy cars on the floor and licked the toys.

"My apartment is very cramped, so it doesn't matter if I don't have access to a medical facility. Can you please isolate me somewhere?"

The person on the other end of the phone replied, "In consideration of your children, I will do my best to find you a place to stay. Please be patient with me."

While I was waiting for an available space in the hospital, my husband called his mother to tell her that he thought that he might become infected.

My mother-in-law, who is in her 70s, said, "I can take care of your children." However, even without any symptoms, the children might already be infected.

Since elderly people are at high risk of becoming seriously ill if they get infected, we couldn't send our kids to them.

I couldn't find the solution to what to do.

On the evening of April 6, the public health center called and said that they found an available space.

The person said, "I will pick you up in about 30 minutes. Please wear a mask and wait in front of your home."

I felt relief that I could finally reduce the risk of having my family infected.

My husband was also relieved and explained to our children, "Mommy is going to cure her illness."

It was the 10th day after the onset of my symptoms.

A van picked me up in front of my home. A sign on its side read "Vehicle transport for private-sector patients."

A public health official was in the passenger seat, which was partitioned off with plastic.

When the medical staff in personal protective equipment (PPE) led us from the elevator to our floor, the first thing I saw was the yellow “No Entry” tape often seen at crime scenes.

Everywhere I looked, there were people in PPE using disinfectants and wearing medical gloves.

I had a CT scan the next day which confirmed that I had a mild case of pneumonia, but the doctor told me that it was at a level that heals by itself so no medicine was needed.

Instead of giving me medicine, they checked my temperature, measured my blood pressure and monitored my blood oxygen level four times a day.

"There is no silver bullet for this illness," the doctor said. "Eat well, sleep well and strengthen your body and immunity to beat the virus."

I was hospitalized in a four-person room for people with mild cases. There was a toilet attached to our room, and we could only leave the room for a 30-minute shower in the common shower room.

I couldn't go to the store in the hospital and if there was something I needed, I had to order it through a nurse.

Of course, my family could not visit me. There were curtains in the room separating the patients from each other. Most of the conversation during the day was with the nurses who came to our room on their medical rounds.

The meal wasn't enjoyable as I lost my sense of taste and smell. I couldn't tell the difference between cooked eggs and stewed vegetables with “koya” tofu, which made it hard to finish the dishes.

Three days after I was hospitalized, I suddenly was able to taste the miso soup. It was the first time I thought that cold miso soup was so delicious.

I didn't have any serious symptoms other than a slight fever of around 37 degrees, headaches and some overall body pain that made it difficult to sleep. There were some nights that I needed a pain reliever to fall asleep.

A few days later, the first hotel was prepared by the Tokyo metropolitan government to accommodate patients with mild symptoms or those who are asymptomatic.

On my fourth day of being hospitalized, I was told to move to the hotel. The doctor said, "I would like to make room for patients who need hospitalization as soon as possible."

At the hotel, no one could leave their room except to pick up a boxed meal in the lobby three times a day. Still, because it was a private room, I was able to speak with my family for the first time in a long time. I thoroughly enjoyed taking a shower for as long as I liked.

I thought this part of my experience was the moment before I could go home.

However, I felt chills on the night of my arrival. They did not stop even after I raised the temperature of the air conditioner in my room.

My chest hurt every time I breathed. I called through the extension phone and explained my condition while asking for a blanket. I thought that I would get better if I was able to sleep.

However, a doctor called me back and said chills could be a sign that my illness might be worsening. He wanted me to return to the hospital just in case.

A man in a protective suit drove the van to the hospital. He said he usually works as a driver transporting senior citizens to care services, but said there had been a decrease in demand for such transportation.

He said that his wife wanted him to stop transporting novel coronavirus patients since they have children at home. But he explained there were not enough ambulances and private businesses were reluctant to assist in transporting infected people.

It started raining in the evening and the temperature had dropped. It was freezing inside the vehicle, but I couldn't ask, "Please close the windows because it's cold" to the driver who said before I could say anything, "I'm sorry, but can I leave the windows open?"

Occasionally, I was hit by the raindrops coming in through the open window. For the first time, I realized that I might never see my family again unless I recovered.

Since I had mild symptoms, I never thought that I might die despite being infected. However, it is impossible to interact with family members unless one gets better. I felt something closer to fear than loneliness.

My husband told my mother that I was re-admitted to the hospital and she replied while crying over the phone, "I wish I could take her place. I want to see her again even if for only one second."

When I returned to the hospital, my fever had risen to 38 degrees.