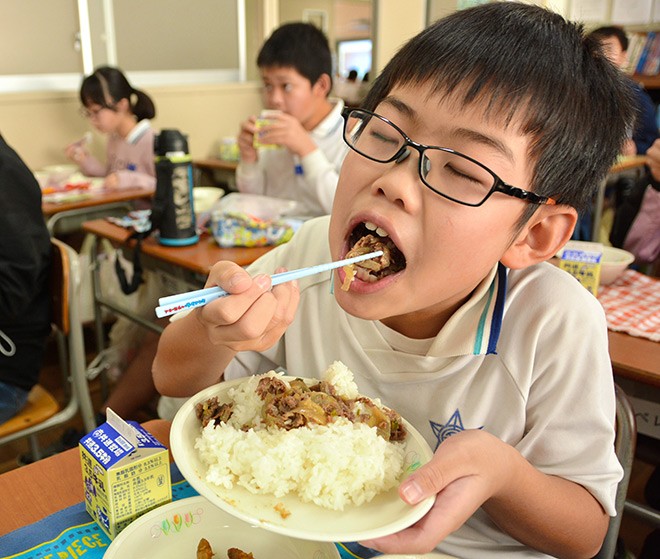 KOBE--Sixth-graders at Uozaki Elementary School are not allowed to talk at the lunch table to prevent the novel coronavirus from spreading, but that was tougher than usual on Nov. 27.

The students could not resist oohing and aahing at the sight of the day’s fare: Kobe beef.

“So fatty and it’s tasty!” a student exclaimed.

The day’s menu was a bowl of rice topped with prized Japanese “wagyu” beef--not your typical school lunch.

At first, Soki Tsutsui decided to set aside the beef bowl until he finished his side dishes. But the smell was so mouthwatering that the 12-year-old gave in and dove straight for the beef.

“This is the best meat I’ve ever eaten. Without a doubt,” Tsutsui laughed. “I’m gonna brag about it to my parents.”

It was the first time the students have been given the delectable treat, named “Kobe-gyu-dondon,” at their school in Kobe’s Higashi-Nada Ward.

But it was not a rare sight.

Jubilant scenes like this have taken place around Kobe since October, after the city decided to provide school lunches using Kobe beef at almost all public elementary and junior high schools.

Until the end of fiscal 2020, students are expected to be served dishes like Kobe beef stew and Kobe beef sukiyaki more than once, part of an effort to boost the livestock industry left reeling from the pandemic.

The epicurean project to beef up school lunches is not limited to Kobe, the capital of Hyogo Prefecture.

In the overall prefecture, about 1,250 schools, both public and private, have served students lunches using the prefecture’s specialty wagyu, including Kobe beef.

Children attending 380 schools in 19 cities and towns in Shiga Prefecture have enjoyed school lunches using Omi beef for such dishes as gyudon (beef-on-rice) and nikujaga (simmered beef and potatoes).

In Hokkaido, about 1,600 schools have served local scallops at lunch. As of December, salmon, hokke (Atka mackerel) and pollock have been added to the menu.

In Aichi Prefecture, Nagoya Cochin, one of the three major jidori (domestic free-range chicken), will soon appear on plates at 1,450 or so schools.

Students at public elementary and junior high schools are expected to be nourished with fried chicken and oyakodon (chicken and egg rice bowl).

The trend in haute school lunches is inseparable from the development of the COVID-19 pandemic, which has taken a big bite out of demand for dishes otherwise coveted by foodies.

Wagyu consumption has dropped sharply amid the pandemic, according to the farm ministry.

The wholesale price of domestic wagyu in April dropped by 26.6 percent year on year, the ministry said. And some data shows retail inventories increased by about 20 percent from the same month a year ago.

The same is happening to seafood consumption. Almost all items sold in the market have been affected, with wholesale prices and shipping quantities dropping by more than 20 percent year over year.

Expensive ingredients in particular have been affected because many luxury items are catered toward foreign visitors and the restaurant industry.

“They were directly affected by the pandemic and a voluntary restraint on going out,” a ministry official said.

The central government launched a project in April to fully subsidize the prefectural governments’ expenses from purchasing wagyu and seafood products for school lunches until the end of fiscal 2020 to boost domestic consumption of home-grown ingredients.

An official from the Hyogo Prefecture Meat Industry Co-operative Association said the central government’s project has been a big help to Kobe beef retailers.

“Some stores had no customers to sell meat to. They had so much in their inventories that they could not store it all in their fridges,” the official said.

“We appreciate the stable consumption,” the official said.

But they also warned that retailers cannot rest easy just yet.

Because of the pandemic’s third wave, restaurants and bars in some parts of Tokyo and Osaka have once again been asked to close early.

“Yet another decline in consumption is possible, and that prospect makes me scared,” the official said, urging the central government to continue the project for one more year.