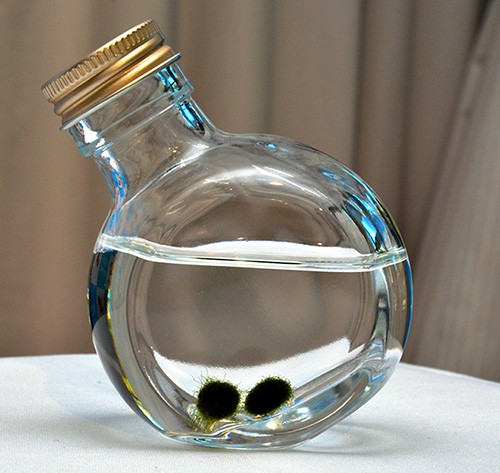 Hida Suppon Marimo moss balls shown at the Gifu Chamber of Commerce and Industry in Gifu on Nov. 24 (Fumiko Takaki)

TAKAYAMA, Gifu Prefecture--Officials are trying to give the struggling area here a boost through sales of a more durable “marimo” moss ball that forms in hot spring water used to cultivate “suppon” softshell turtles.

Marimo moss balls grow naturally in Lake Akanko in Hokkaido and elsewhere, and the cute appearance of the small ones has long made them—imported or artificially made—popular bottled desk ornaments.

The Hida Suppon Marimo from the Okuhida onsen hot spring resort here can be kept in tap water.

“The Hida region has suffered from the coronavirus pandemic and the torrential rain (in July),” said Hiroyuki Takenaka, 62, president of Gifu-based Micro Algae Corp., which analyzed the moss balls. “We hope we can offer a new local specialty from Hida.”

Yakedake Suppon, based in Takayama, said the black, round masses started to emerge in its cultivation pond from April to June about five years ago. The company uses spa water that hovers around 28 degrees to grow about 20,000 softshell turtles.

The company sought advice from Micro Algae, which produces food and cosmetic products using microalgae. It found the balls consisted of filamentous algae.

“I think they might have rolled into balls due to subtle currents that are caused when suppon turtles swim,” Takenaka said.

A further analysis conducted by a professor at the Tokyo University of Marine Science and Technology revealed that it was an algae in the Pithophoraceae family.

“I never thought that the rare marimo could be born in our pond,” said Seiichi Ishida, 68, president of Yakedake Suppon.

In preparation for commercialization, Micro Algae removed the smell of spring water and applied other treatments to the marimo so that they can be kept in tap water.

Hida Suppon Marimo are more resistant to temperature increases than other commercially available ones because they were generated in spa water, the company said.

A container of two marimo balls about 1 centimeter in diameter costs 1,100 yen ($10.50) at Okuhida Garden Hotel Yakedake. Thirty units will be sold by the end of the year.

The company intends to offer 300 units next year by expanding sales channels to souvenir shops in the Hida region.

For inquiries, visit the company’s official website at (http://www.mac-bio.co.jp/).