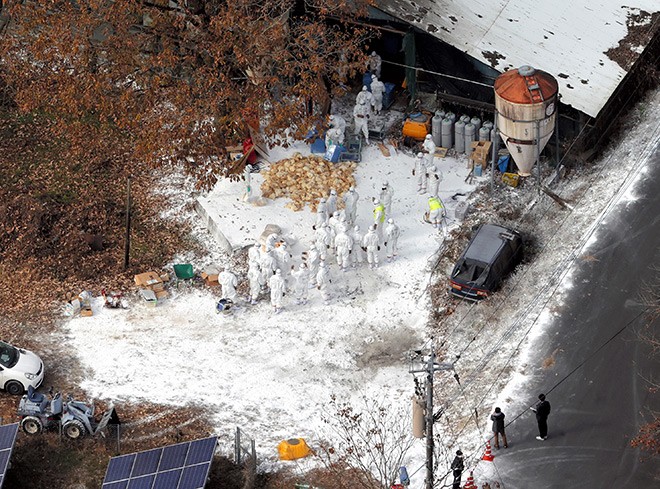 The farm ministry has issued a nationwide warning about a potentially unprecedented spread of avian flu, which has already led to the culling of a record number of chickens.

Most of the avian flu cases confirmed so far have occurred in western Japan. But the avian flu virus was found earlier in the feces of wild birds in Hokkaido, and experts said all prefectures are at risk of the disease.

“With the first virus detected in a wild bird in Hokkaido in late October, the avian flu had likely already arrived on Japanese shores at that time, and while there might be some differences in intensity, there is the risk of infection anywhere,” said Yoshihiro Sakoda, a veterinary science professor at Hokkaido University.

So far this season, about 2.5 million birds have been destroyed as of Dec. 10. The number includes 2.05 million layer chickens and 430,000 broiler chickens, exceeding the previous record of 1.83 chickens culled in the 2010 flu season.

The number was already increasing on Dec. 11 after Okayama prefectural government officials confirmed avian flu infections at a poultry farm in Mimasaka, which borders Hyogo Prefecture. Officials had begun culling about 640,000 chickens, which would be one of the largest cases at a single farm in Japan, according to prefectural government officials.

Farm ministry officials said the cull would not affect egg and chicken meat supplies because about 140 million each of layer and broiler chickens are being raised in the country.

The domestic animal infectious diseases control law calls for the culling of all poultry at any farm that has a suspected case of highly pathogenic avian flu. Government subsidies compensate for the birds that are destroyed.

Sakoda said confirmations of avian flu in poultry farms around the nation indicate that the virus has spread in an unprecedented manner in the natural environment.

Wild bird feces collected in Monbetsu, Hokkaido, on Oct. 24 showed the first signs of the avian flu virus this season.

The first report of avian flu at a poultry farm was made in Mitoyo, Kagawa Prefecture, on Nov. 5, the earliest reporting ever for the disease at a farm.

Subsequently, avian flu confirmations were made in Fukuoka and Hyogo prefectures. In December, avian flu cases were reported in Miyazaki, Nara and Hiroshima prefectures.

On Dec. 10, farms in Wakayama and Oita prefectures were confirmed to have birds infected with the highly pathogenic avian flu.

So far, 22 farms in nine prefectures have reported infected birds.

In 2003, a highly pathogenic strain of avian flu was confirmed in Japan for the first time in 79 years. Since then, avian flu has reached Japan in cycles of three or four years.

Avian flu normally hits isolated farms because the virus is usually carried by wild birds. But a disturbing pattern has emerged on the main island of Shikoku this season.

After the first confirmation was made at the poultry farm in Mitoyo, other cases were found at nine farms located within a radius of 3 kilometers over the following month.

In addition to signs that small wild animals had snuck into the farms, there were cases of workers not changing their gloves or boots when entering the farms.

Two farms were operated by the same company, and there are suspicions that the movement of people or supplies spread the virus.

The area around Mitoyo is the largest egg producing region on Shikoku, and a farm ministry official said it was extremely rare for avian flu to spread so quickly in such a small area.

(This article was compiled from reports by Noriyuki Kaneta, Setsuko Tachikawa and Tomoe Ishikawa.)