Many schools in Japan still not accessible for wheelchair users 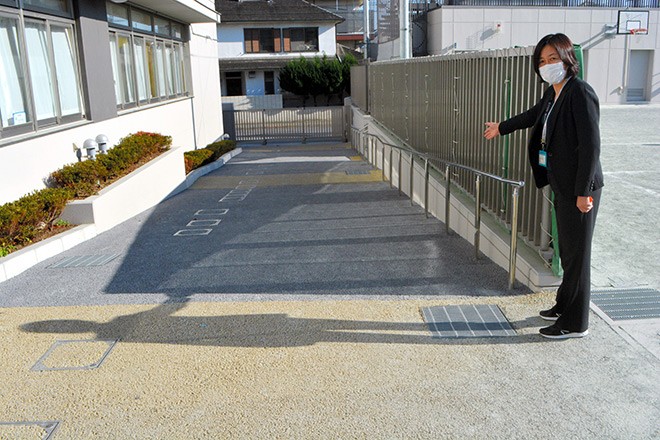 Low-pitched slopes lead from the main gate to the school building at Daizawa Elementary School in Tokyo’s Setagaya Ward on Dec. 8. (Kazuyuki Ito)

More than 30 percent of public elementary and junior high schools in Japan lack a wheelchair-accessible toilet and over 70 percent do not have an elevator, according to a recent survey.

The education ministry released the preliminary figures of its first survey on accessibility in schools nationwide as of May 1.

Because many schools are designated to serve as an evacuation center during a disaster, the ministry has set a goal to make them more wheelchair accessible by fiscal 2025 and expand subsidies to local governments to make that happen.

The governments have focused on seismic safety enhancement in terms of constructing infrastructure for school facilities. Currently, almost all elementary, junior high and high schools have completed earthquake-resistant work.

But the degree to which local governments have implemented barrier-free facilities varies widely, a situation that the ministry called “insufficient.”

The ministry intends to have at least one multiple-use toilet installed at 95 percent of the schools by fiscal 2025.

It also aims to create slopes for wheelchairs to eliminate differences in the level of the floors at all schools and install elevators at 40 percent of school buildings by then.

Starting from the next fiscal year, the ministry will increase the ratio of subsidies to local governments for the upgrades from one-third to one-half.

Under the revised barrier-free law, starting from April 2021, newly constructed public elementary and junior high schools will be required to have a wheelchair-accessible toilet, a slope, an elevator and other barrier-free features.

Existing schools will also be asked to update their facilities to include the features.

Many students with disabilities have had difficulty due to the slow process of making schools wheelchair accessible.

Shunsuke Nishida, 20, who lives in Nagano Prefecture and is a student of Waseda University’s Faculty of Human Sciences’ e-school, is one of them.

Nishida has an intractable disease that weakens the muscles and has used a wheelchair since he was in the fourth grade.

He was forced to travel outside his school district by car to attend the only elementary school in the area that had an elevator.

He made good friends there but he was unable to attend a junior high in the area since none had an elevator. At the school he ended up attending, he struggled to find a friend who understood his disability.

Nishida hoped to have his pick of high schools and studied hard to that end. But he gave up on attending his first choice after it said it “did not have barrier-free facilities” and enrolled at a prefectural school for people with disabilities.

“If all schools were barrier-free, I could've gone to a regular high school,” Nishida said.

He said physical support, not just infrastructural support, is also necessary for students with disabilities.

Tokyo’s Setagaya Ward in 2007 enforced regulations to make schools and other public facilities more wheelchair accessible. The ward office has since installed slopes and other barrier-free features when elementary and junior high schools undergo alterations or expansions.

When Daizawa Elementary School was rebuilt in September 2019, slopes for wheelchairs were installed leading from its main gate to the school building.

The school was designed to eliminate almost all differences in levels on its floors. It has two multiple-use toilets and an elevator.

“We're able to accept a child who needs special consideration with a sense of security,” said Yoshie Kazama, the school’s vice principal.

Approximately 270,000 children attended a special classroom of elementary and junior high schools in fiscal 2019, according to the ministry, almost double the number 10 years ago.

The number of children with disabilities who attend regular schools but take some classes in a separate room has also been rising.

A ministry official said there needs to be “an environment that is accessible to people with all types of disabilities, not just people who have physical disabilities.”

Wheelchair user Toshiya Kakiuchi, 31, a president of a consulting company, said society has changed significantly and become more accessible compared to the times when “it was an unquestioned assumption for people with disabilities to attend a special-needs school.”

“But it's still a work in progress,” Kakiuchi said. “Unless children with disabilities can fully learn and study at elementary, junior high and high schools, it's difficult for them to go to a university, and that will be a loss for society, too.”

Kakiuchi points out that schools are used as evacuation centers and voting stations as well.

“Schools are essential infrastructure not just for education but for an aging society,” he said, and urged the government to prioritize the budget for making schools accessible.

(This article was written by Asako Miyasaka and Kazuyuki Ito.)