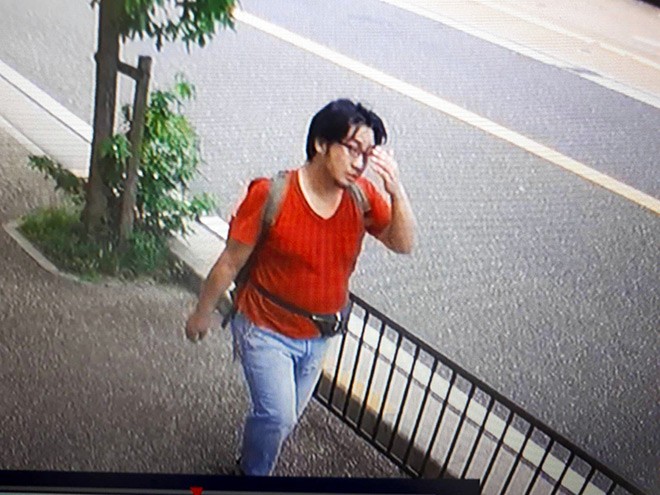 Shinji Aoba is captured by a security camera near JR Uji Station on July 16, 2019, two days before he is suspected of setting fire to a Kyoto Animation Co. studio. (Provided by neighborhood resident)

KYOTO--Prosecutors concluded that suspected mass murderer Shinji Aoba is mentally fit to stand trial over the arson attack at a Kyoto Animation Co. studio that killed 36 employees and injured 33.

They plan to indict Aoba, 42, a Saitama city resident, by Dec. 16, the end of his six-month detention period for a psychiatric evaluation, sources said.

The Kyoto District Public Prosecutors Office will make a final decision after consulting with the high public prosecutors office.

Aoba was arrested on May 27 on suspicion of murder, attempted murder and arson over the attack against Kyoto Animation’s Fushimi studio on July 18, 2019.

Around 10:30 a.m. that day, Aoba is suspected of setting fire to gasoline that he sprayed on the first floor of the studio. Seventy Kyoto Animation employees and executives were in the three-story building at the time.

The entire structure, with a total floor space of about 700 square meters, was destroyed. Aoba is suspected of murdering 36 and attempting to murder 34 of the workers there.

The suspect was severely burned over a large part of his body and needed about 10 months of hospital treatment before he could recover to a state of being able to talk with police investigators.

According to investigative sources, Aoba bought the gasoline used in the attack shortly before he went to the studio. When he was arrested in May,

Aoba told investigators that he used gasoline because he felt that would lead to many fatalities.

He claimed that Kyoto Animation stole his idea for a novel and used it in its works.

But investigative sources said they have found no similarities between the novel he submitted for a competition sponsored by Kyoto Animation and any of the actual works produced by the company.

Prosecutors called for a psychiatric evaluation because Aoba’s mental state at the time of the crime would likely be a major focus of any court trial. The evaluation began on June 9.