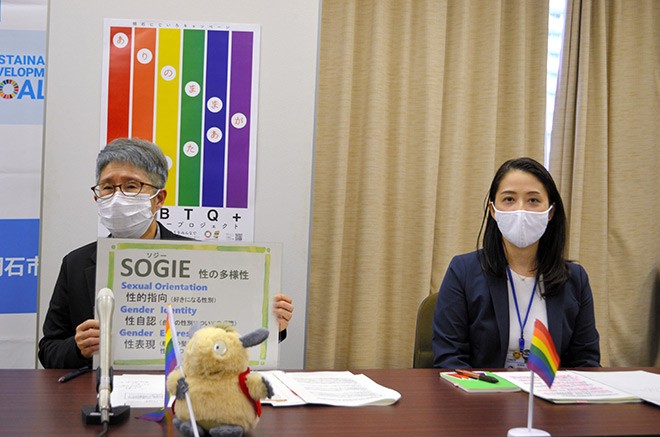 AKASHI, Hyogo Prefecture--Akashi city in January will become the first local government in Japan to introduce a partnership system that treats the children of same-sex couples as “family,” city officials said on Dec. 10.

The move is in response to calls from sexual minorities to recognize the family relationships between LGBT couples and their children.

While the planned system is not legally binding at the national level, it will allow same-sex couples in the city to change their relationships from “roommates” to “relatives” in their residence certificates, effectively recognizing them and their children as equivalent to a family, according to the city.

Under the new partnership system, same-sex couples will be able to live in municipal housing and be buried together in municipal cemeteries.

City officials also said they expect the system will encourage schools and kindergartens to allow same-sex parents to pick up their children because they usually hand them over only to biological parents.

“It’s the public sector’s role to support residents without leaving anyone behind,” Akashi Mayor Fusaho Izumi said. “The new system covers children because we are working on town development that centers around children.”

The system will also recognize the relationships of heterosexual couples who chose not to file marriage registrations, such as those who want to maintain separate surnames, as equivalent to marriages.

To gain certification, the couple must both be of adult age, and at least one of them is required to live in the city or scheduled to move there.

The city will issue the couples with card-type certificates bearing their names. The names of their children can also be printed on the cards.

The Japanese government does not recognize same-sex marriages, but around 70 municipalities nationwide have introduced systems to certify same-sex couples as equivalent to married couples. Tokyo’s Shibuya Ward was the first to do so, in 2015.

This spring, the Akashi city government set up a division to promote the understanding of sexual diversity in society and employed two dedicated staff members who are both sexual minorities for that mission.

“There are many forms of couples and family, so we wanted to meet the needs of those people as much as possible,” one of the employees who was involved in creating the new partnership system said at a news conference.