Study: Migration to Ryukyu isles from Taiwan was no accident 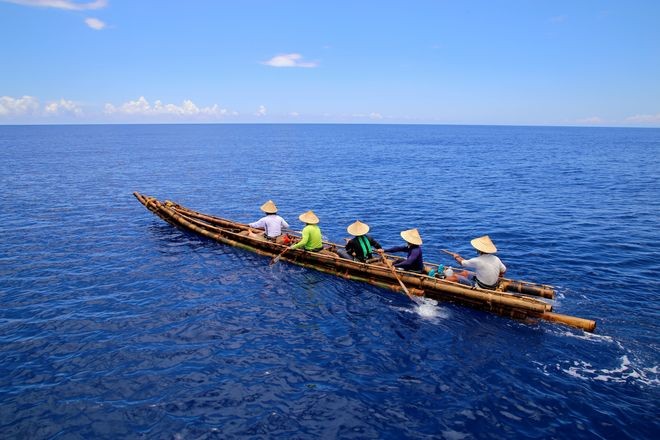 An attempt to replicate a human migration from Taiwan to Yonagunijima island in Okinawa Prefecture showed that a dugout canoe can cross the Kuroshio Current. (Provided by the Holistic Reenactment Project of the Voyage 30,000 Years Ago)

The ancestors of Japanese who settled in the Ryukyu Islands about 30,000 years ago were likely “explorers” from Taiwan who had a clear destination in mind, a group of researchers said.

One generally accepted theory has been that the first inhabitants landed on the Ryukyu Islands, current-day Okinawa Prefecture, by chance after being swept away by the Kuroshio Current.

However, the research group, comprising members from the University of Tokyo and other institutions, said its analysis of buoy movements and other findings strongly show that the travelers did not accidentally end up there.

Their scientific paper was published in the journal Scientific Reports.

Old Stone Age ruins that dot the Ryukyu Islands indicate that the first settlers had crossed the ocean from Taiwan and the Philippines.

To reach the islands, they needed to cross the Kuroshio Current, one of the world’s fastest ocean currents whose course hasn’t changed much over the past 100,000 years.

The researchers analyzed data collected by the U.S. National Oceanic and Atmospheric Administration and other organizations, including information on 138 buoys released from the eastern coast of Taiwan and the northern Luzon island in the Philippines between 1989 and 2017.

They found that a large majority of the buoys failed to cross the Kuroshio Current and heading to areas north of Taiwan and to the Chinese continent.

The six buoys that did cross the current were influenced by typhoons and strong seasonal winds.

Such climate conditions would make it difficult for people on ancient crafts to navigate safely.

Therefore, the researchers said, it was more likely that the early seafarers had more carefully plotted their courses than had been assumed.

The group also noted that around 10 men and women in total are the minimum needed to maintain a population on a new island. For that reason, the researchers concluded there was an extremely low possibility for that number of men and women to get on a drifting boat and journey to an island by chance.

“Our findings showed with conviction for the first time that the drift hypothesis is almost impossible,” said Yosuke Kaifu, a professor at the University of Tokyo’s University Museum and former chief of the Division of Human Evolution at the National Museum of Nature and Science. “I think it would be appropriate to think of our ancestors who crossed the ocean as explorers who took on a challenge to migrate intentionally.”