EDITORIAL: Travel curbs crucial to rein in the surge of new COVID-19 cases 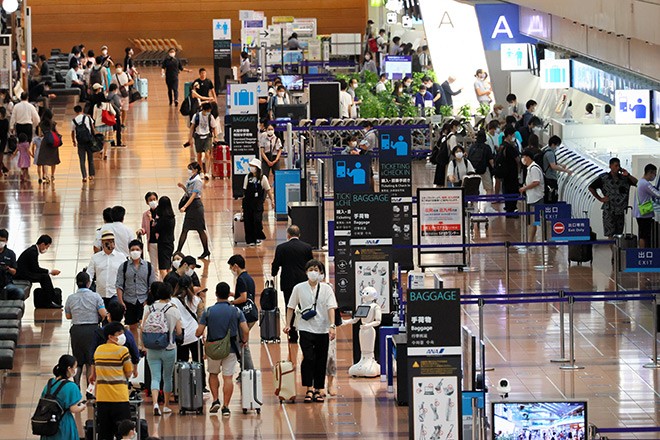 Yasutoshi Nishimura, the state minister in charge of economic revitalization who also serves as minister responding to the novel coronavirus, expressed alarm Dec. 11 about the latest surge in COVID-19 cases. At a news conference following a meeting of the panel of experts advising the government on its response to the pandemic, Nishimura repeatedly said, “I want to share a sense of crisis with the people.”

But it is Prime Minister Yoshihide Suga, the chief executive of the government, who more than anybody else should be harboring a sense of crisis about the current wave of cases.

Asahi Shimbun editorials have warned of a serious gap in perception about the health crisis between experts in infectious diseases and health care workers monitoring developments and the Suga administration, which puts higher priority on keeping the economy rolling. Instead of narrowing, this gap has been widening since autumn. Our concerns are growing.

The panel called for the Go To Travel tourism promotion program to be temporarily suspended in areas where COVID-19 cases are rising sharply, that is areas at the second highest “stage 3” of the risk alert levels defined by the panel.

It was the latest in a number of such calls by the panel, and came as a new set of more specific policy recommendations were proposed to curb the spread of the virus.

The same day, however, the Cabinet decided to ramp up funding for the program aimed at rescuing the embattled tourist industry by subsidizing people’s travel expenses. Speaking on an internet program, Suga said he had no intention at present of suspending the program. While he indicated a willingness to discuss related issues with local governments, Suga clearly is loathe to junk the program he helped to initiate.

Many medical institutions across the nation face looming shortages of hospital beds and health workers, with some struggling to treat patients with other problems. Public health centers are now hard-pressed to trace the source of infection in the surging new cases. The ability of these centers to trace routes of infection had been viewed as a major advantage in Japan’s response to the public health crisis.

To lessen the burden on people and organizations working on the front line to protect people's lives and health, the government clearly needs to place the highest priority on stemming the spread of cases. This is no time to promote the Go To campaign.

If the government keeps spending public funds to trips and dining out with others, its calls for people to stay and work from home as much as possible will never be effective.

One important lesson countries have learned from dealing with the pandemic is that it is vital to respond quickly to early warning signs, even if indicators show the situation is not yet as bad as stage 3.

The expert panel also called on people to “spend the year-end and new-year holidays in a quiet manner.”

This advice echoes the fact that many governors are already urging residents to avoid returning home in the middle of the homecoming rush.

During the year-end and new-year holidays, many hospitals and clinics will be closed, while central and local government organizations, including public health centers, will also scale back their operations.

Many patients may not be able to receive proper treatment because of a shortage of institutions able to accept them.

If a large number of people move around during the holiday season, the situation will only get worse later.

Suga himself needs to send a strong message without leaving the task to the expert panel and prefectural governors.

What the government has called a “crucial three weeks” for its policy efforts to bring the fresh outbreak under control will soon be over. But the picture remains grim.

Shigeru Omi, chairman of the COVID-19 advisory panel, on Dec. 11 called on the government to make “swift and reasonable” decisions.

The government should take his desperate appeal for action very seriously.