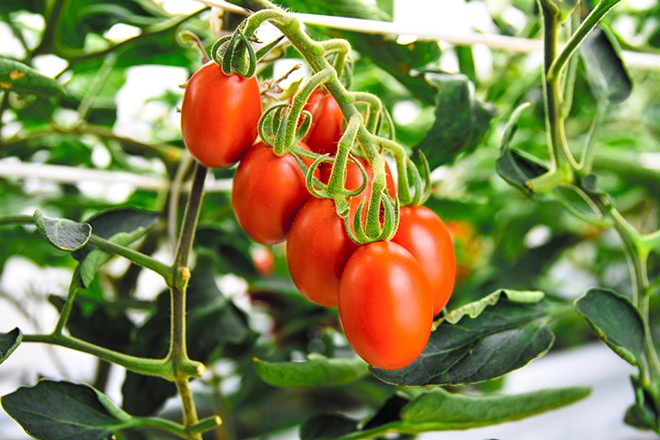 This bunch of genome edited tomatoes has about five times the gamma aminobutyric acid (GABA) of normal produce. (Provided by Sanatech Seed Co.)

The health ministry on Dec. 11 accepted the first case of a genome edited tomato being grown in Japan with about five times the gamma aminobutyric acid (GABA) of normal produce.

The ministry established a reporting system for genome edited food products in October 2019 by mandating that the process must not involve the introduction of new genes.

Genome edited foods are not required to pass safety tests because any new varieties of crops are in essence developed in a similar form to genetic mutation that occurs in nature.

The new tomato variety was developed by Hiroshi Ezura, a professor of genetic engineering at the University of Tsukuba who is also an executive of Tokyo-based Sanatech Seed Co., a venture capital firm that reported its breakthrough to the health ministry.

It took Ezura 15 years to develop the genome edited tomato. He credited his success to the development in 2012 of CRISPR/Cas9 editing technology, which led to this year’s Nobel Prize in Chemistry.

The company will sell seeds of the edited tomato to farmers who plan to market the produce. Farmers will be asked by Sanatech Seed to provide a food label stating that the produce was grown from genome edited seeds.

It will take another year or so before any of the tomatoes appear in grocery stores in Japan.

A health ministry panel of experts met Dec. 11 and agreed there was no need for safety tests based on data that had been submitted beforehand. Sanatech Seed then submitted its report about the new tomato seed to the ministry and it was accepted.

Unlike genetic mutation, genome editing involves pinpointing which genome sequence needs to be altered to produce a new variety. In theory, the technology should allow for more efficient improvements in food varieties.

The humble tomato seed stands as the first product to have a report officially submitted about its genome editing, but other efforts have also been made in producing meatier fish or rice stalks with a greater yield.

(This article was written by Naoki Shoji and Kai Ichino.)