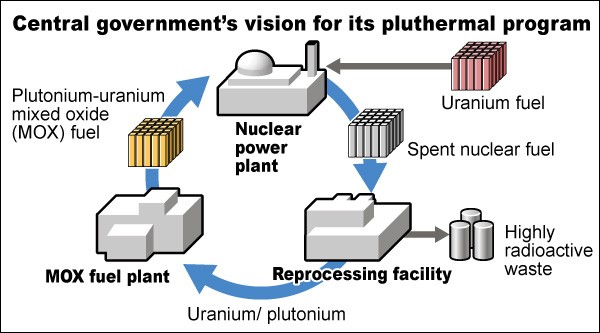 A consortium of electric power companies that envisaged Japan operating on a network of nuclear reactors using pluthermal generation technology is having to drastically scale back that ambitious goal.

The beauty of the technology is that MOX fuel is created by recycling plutonium processed out of spent nuclear fuel.

The first pluthermal plan compiled in 1997 set a goal of building 16 to 18 nuclear reactors using MOX fuel by fiscal 2010.

Currently, four reactors in Japan use the fuel.

But the slow pace of the spread of the pluthermal program led the government in 2009 to extend the date for achieving that goal to fiscal 2015.

In the interim, the 2011 earthquake and tsunami disaster that triggered the triple meltdown at the Fukushima No. 1 nuclear power plant resulted in all nuclear reactors being shut down for tougher safety screening. That in turn prompted a wide-ranging review of the pluthermal program.

Since then, the Federation of Electric Power Companies of Japan (FEPC) has compiled a blueprint to build at least 12 reactors using pluthermal technology by fiscal 2030, according to sources.

With only a handful of ordinary nuclear reactors now operating, the goal of 16 to 18 new reactors is deemed to be unrealistic.

Presidents of the nine electric power companies that operate nuclear plants, as well as Japan Atomic Power Co. and Electric Power Development Co., are scheduled to meet shortly to approve the pluthermal vision.

Once it is approved, the plan will be submitted to Hiroshi Kajiyama, the economy minister who oversees the nuclear power industry.

Under this scenario, utilities will be urged to increase the number of reactors using pluthermal energy.

Burning MOX fuel would be one way to reduce the stockpile of plutonium possessed by Japan both domestically and abroad. Currently, Japan has about 45 tons of plutonium, an amount that has raised concerns internationally because the material theoretically could be used to build thousands of nuclear weapons.

Another catalyst for the new pluthermal plan occurred in July when a spent nuclear fuel reprocessing facility in Rokkasho, Aomori Prefecture, to be operated by Japan Nuclear Fuel Ltd., passed a safety screening test.

The central and Aomori prefectural governments had called on the FEPC to devise a new pluthermal plan as soon as possible.

This would allow the 12 nuclear reactors envisaged as using pluthermal technology to consume all the reprocessed plutonium coming out of the Rokkasho facility, even if it was operating at full capacity.

But with only four reactors now in the pluthermal program there are no assurances that more will join the program.

For one thing, obtaining local government approval to resume reactor operations is becoming increasingly difficult in light of revelations that some nuclear reactor buildings were built above active seismic faults, raising concerns about another catastrophic nuclear accident occurring in the event of a massive earthquake.