Trump’s claim of ‘rigged’ election gains supporters even in Japan 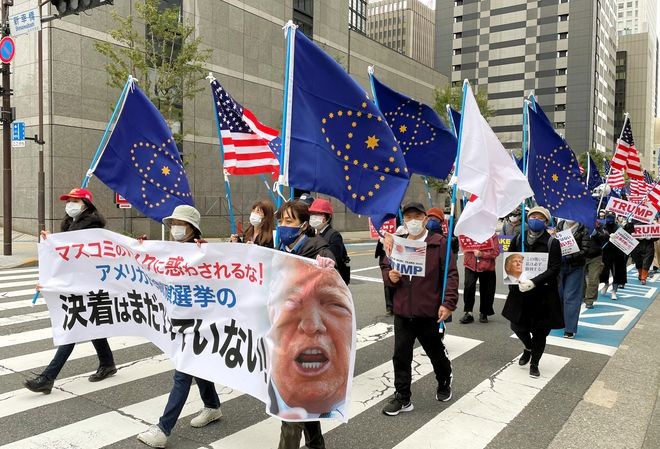 Demonstrators carry flags of the “New Federal State of China,” along with Stars and Stripes flags, in Tokyo’s Chiyoda Ward on Nov. 29 as they make the unfounded claim that the U.S. presidential election was “rigged.” (Chihiro Ara)

Nearly one month after the U.S. presidential election, a group of demonstrators supporting U.S. President Donald Trump hit the streets, loudly proclaiming that the election was rigged.

However, this protest took place not in the United States, but started from Hibiya Park in central Tokyo. On the afternoon of Nov. 29, the demonstrators, holding placards in their hands stating the unfounded allegation that the election was rigged, loudly set out on their march.

“Trump is the winner of the U.S. presidential race!” another chant said as the group marched through the Ginza shopping district. “Biden is not!”

The demonstrators’ protests were not just about the U.S. presidential election.

Some of the marchers carried easily recognizable national flags--the Stars and Stripes of the United States and the Hinomaru of Japan, but many others were seen holding much-less familiar flags, which featured yellow stars on a blue background.

They were the symbol of a group called the “New Federal State of China,” whose establishment was announced in June by Guo Wengui, an anti-Beijing businessman with political connections, and Steve Bannon, a former top Trump aide.

A chant at one point said, “Take down the CCP (Chinese Communist Party).”

Some participants carried a banner showing a passage from the Bible and a sheet of paper declaring the U.S. presidential election was a “fight between good and evil.”

The demonstrators are part of a small but vocal minority in Japan who endorse Trump’s argument that he cannot accept his defeat to Joe Biden in the presidential election because the result was “rigged.”

Opinions in favor of that stance are typically seen in cyberspace, but they are sometimes also heard shouted by street protesters in Tokyo.

After the conclusion of the Nov. 29 demonstration, a couple in their 70s said they have been Trump supporters for four years because the president “relies on force in dealing with China.”

A woman in her 50s said she used to hate Trump until September, but she came to feel discomforted by the Western media's negative portrayal of him.  When she looked at Trump’s personal Twitter account, the woman said, she was “impressed by the way he never sells out the United States in fighting evil.”

The woman said she has no religious affiliation but has been influenced by a Chinese-American friend who is a member of Falun Gong, a spiritual movement branded by the CCP as an “evil cult.”

All the participants interviewed said their source of information is the internet. A public security official said about 650 people participated in the Nov. 29 demonstration, including those affiliated with Falun Gong and several other new religions.

Nobutaka Inoue, a professor emeritus of sociology of religion with Kokugakuin University, said those new religions are openly anti-CCP and the arguments made during the protest march “resonate with their policy lines.”

But the whole matter “could better be understood in terms of information flow in the age of social media rather than in the light of religious beliefs,” Inoue added.

“A growing number of people select media outlets that conform to their own value system and rely solely on information provided by those outlets in forming their understanding of the world,” the sociologist said. “That resembles the way religious fundamentalism looks at things.”

ONLY A ‘HANDFUL’ SPREADING MISINFORMATION

Arguments that the U.S. presidential race was rigged continue to be posted on Twitter.

Between Oct. 24 and Nov. 8, there were 4.47 million Japanese-language tweets, including retweets, that contained at least one of the three keywords of “Trump,” “Biden” and “U.S. presidential election,” according to a study by Fujio Toriumi, an associate professor of social media analysis with the University of Tokyo graduate school.

Analysis of the 500 most influential posts revealed a cluster of about 580,000 tweets by about 100,000 user accounts, which are likely “Trumpist” because of what they had posted. And more than 60 percent of these are “conservative” user accounts that had spread, for example, a large number of posts in the past in favor of former Japanese Prime Minister Shinzo Abe, Toriumi said.

The most influential post in that cluster, which was spread about 14,000 times, cited the groundless argument that mechanically manufactured pro-Biden mail ballots had been discovered.

Half of all the tweets in the cluster were concentrated around about 5 percent of all the user accounts in it.

“All this points to a lopsided situation in which only a handful of people are responsible for the largest portion of the spread of information,” Toriumi said. “Phenomena of that sort are not uncommon on Twitter.”