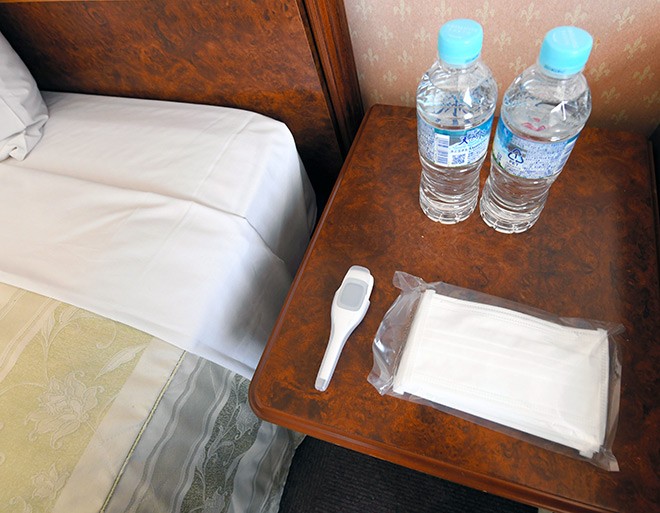 YOKOHAMA--A cautionary tale is emerging out of Tokyo's neighboring Kanagawa Prefecture that even mild cases of COVID-19 should be taken extremely seriously.

A man in his 50s was found in a state of cardiac arrest at 7:57 p.m. on Dec. 11 at a hotel in Atsugi being used for COVID-19 patients with mild symptoms or who were asymptomatic. The man was rushed to a hospital where he was pronounced dead.

Kanagawa prefectural government officials held an emergency news conference late that evening and said they were still looking into the cause of death and whether staff at the hotel handled the matter appropriately.

It was the first death of a Kanagawa resident resting and recuperating at a facility for patients with mild symptoms. While prefectural authorities called the case extremely rare, they pledged to review the health monitoring arrangement of mild cases at designated facilities.

According to the prefectural government, the man developed a fever and pain in his joints on Dec. 4. He was confirmed with COVID-19 on Dec. 8 and entered the Atsugi hotel the following day. He had no pre-existing health condition and the COVID-19 was considered mild.

But on the morning of Dec. 11, the man complained of a headache, back pain and general lethargy. His fever had reached 37.8 degrees.

While talking by phone to a Kanagawa prefectural public health worker, the man said the back pain arose because he was sleeping so much, adding that he felt slightly better when he moved around.

However, at 3 p.m. on Dec. 11, the man did not make scheduled contact about his health condition through the Line free messaging app at the appointed time. An hour later, a nurse at the hotel used the extension phone to call the man’s room but there was no response.

The man’s mobile was called and while he did answer, he was unable to talk and the connection went dead.

Calls were made to the extension and mobile phones on three occasions at around 6:30 p.m. and an hour later using the extension. But there was no answer in all of the instances.

Around 8 p.m., a nurse at the hotel went to the man’s room and found him in a state of cardiac arrest, lying on his back in bed.

At the late-night news conference, Kanagawa prefectural government officials explained that the man’s blood oxygen levels wavered from the time he entered the hotel. On the morning of Dec. 11, his oxygen level fell to a figure that would normally require an examination by a doctor.

“We cannot say with confidence that we were not at fault,” said a prefectural government official. “But we are still looking into the cause of death and other matters.”

One issue on the table is whether a doctor should have examined the man.

Questions were also raised about the four-hour span between the time the phone connection went dead and the arrival of the nurse in the man's room.

The situated prompted a prefectural government official to call for greater caution in such situations. It also emerged that similar cases of calls going unanswered have occurred in other rooms.