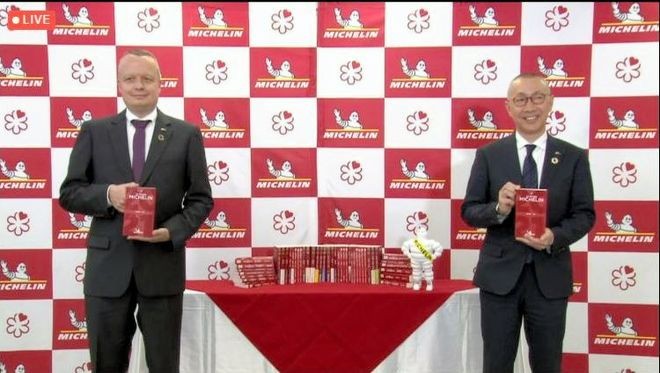 The latest edition of the Michelin guide of starred restaurants in Tokyo ranked 12 with its highest three-star rating, two for the first time, including a Chinese establishment.

The two new three-star restaurants are French restaurant L’Effervescence and Sazenka, which serves Chinese cuisine. Both are located in Minato Ward. Sazenka is the first Chinese restaurant in the capital to reach the highest tier for excellency.

It also introduced a Green Star system to highlight establishments that reduce food loss and make other efforts to contribute to sustainability. Sincere, a one-star French restaurant in Shibuya Ward, and five other eateries were recognized for their endeavors in this field.

The publisher said it initially wondered whether it would be feasible to conduct the annual review of restaurants that offer a fine dining experience in view of the new coronavirus pandemic but went ahead because it wanted to show support for the industry and tourism as a whole.

During an online news conference, Paul Perriniaux, CEO of Nihon Michelin Tire, said the decision to publish the guidebook in such a harsh business climate was considered to be the best way to contribute to a revival of restaurants and the tourism industry.

The restaurants listed in the guidebook are featured in a YouTube video at (https://www.youtube.com/watch?v=I265tlIvk4w).

Shuzo Kishida, 46, who runs Quintessence, a French restaurant in Shinagawa Ward, has won three stars for 14 straight years since the inaugural edition of the Tokyo guide. It also received the new Green Star distinction this year.

Kishida said the restaurant has been collaborating with fellow chefs, journalists and university professors for the past three years to help protect fishery resources.

"Now is the last chance to restore the resources, and I want to make use of the (Michelin's) evaluation for that purpose," he said.

(This article was written by Yumi Kurita and Senior Staff Writer Mitsuko Nagasawa.)