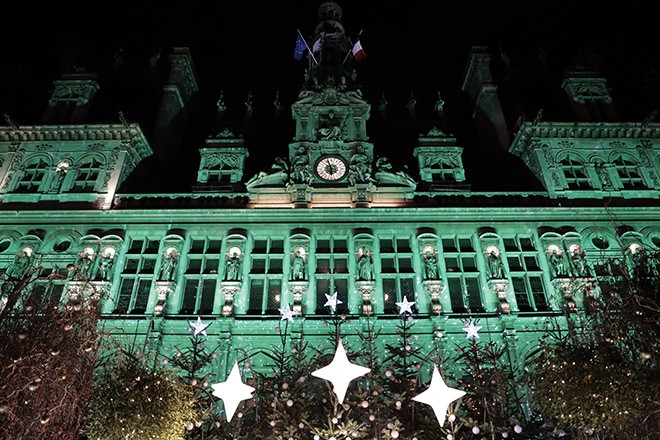 The Paris town hall gets green lightings to celebrate the fifth anniversary of the international pact aimed at curbing global warming on Dec. 12. (AP Photo)

LONDON/BRUSSELS--U.N. Secretary-General Antonio Guterres called on every country to declare a "climate emergency" on Saturday, as world leaders marking the fifth anniversary of the Paris climate accord made mostly incremental pledges relative to the scale of the crisis.

Guterres made his call at a summit aimed at building on momentum behind the Paris deal, buoyed in recent months by renewed commitment from China and the prospect of U.S. President-elect Joe Biden bringing the United States back into the pact.

Nevertheless, the dozens of leaders who spoke mostly offered tweaks to existing commitments or promises of bolder moves before crucial talks in Glasgow in late 2021, rather than breakthrough new policies to hasten the end of fossil fuels.

"Can anybody still deny that we are facing a dramatic emergency?" Guterres, a former Portuguese prime minister who has made climate change his signature issue, said via video.

"That is why today, I call on all leaders worldwide to declare a State of Climate Emergency in their countries until carbon neutrality is reached."

With the impacts of climate change increasingly stark since the Paris deal was struck--ranging from wildfires in Australia and California to collapsing ice sheets--popular pressure has grown on leaders to listen to warnings from scientists.

Britain, co-hosting the summit, made one of the clearest new commitments, announcing late on Friday it would stop direct government support for overseas fossil fuel projects.

Campaigners hailed the move for putting pressure on other G-7 economies to restrict support for oil and gas companies.

Renewed pledges to back Paris from countries such as India, Germany and France were welcomed less in terms of substance and more for keeping alive hopes of faster action to meet the monumental challenge of halving global emissions by 2030 in line with the Paris deal.

Chinese President Xi Jinping, who surprised many in September when he announced the world's biggest producer of climate-warming emissions would become carbon neutral by 2060, and unveiled targets to speed the expansion of wind and solar power.

But China showed no signs of bowing to calls from Guterres and campaigners to wind down finance for new coal-fired power plants, a major source of emissions.

Japan and South Korea, which both pledged in October to reach net-zero emissions by 2050, likewise made no commitments on coal finance, although they did pledge to submit more ambitious emissions targets under the Paris accord.

Pakistan's Prime Minister Imran Khan, by contrast, drew praise for saying the country "will not have any more power based on coal". It was not immediately clear what the pledge would mean for Pakistan's existing plans to build coal plants under a deal with China.

Argentina, Barbados, Canada, Colombia, Iceland and Peru were among 15 countries who shifted from "incremental" to "major" increases in their emissions pledges, the U.N., British and French co-hosts said in a statement.

Climate negotiators say that the Paris process has begun to look far stronger than it did even six few months ago, with countries representing around 65% of global carbon emissions now expected to have committed to reaching net zero greenhouse gas emissions or carbon neutrality by early next year.

But campaigners pointed to the gulf that still yawns between the pace of action and the Paris goals of capping rising global temperatures quickly enough to avoid catastrophic impacts.

"It is the melting of permafrost; forest fires that hit closer to the home of the climate crisis deniers; droughts that ransack living beings of their resources; floods that reminded many of us that we have no escape," Selina Neirok Leem, a campaigner from the Marshall Islands, told the summit.

Guterres said economic recovery packages in the wake of the COVID-19 pandemic were an opportunity to act on climate--but said G20 countries had so far spent 50% more of their stimulus on sectors linked to fossil fuels than on cleaner energy.

"This is unacceptable," Guterres said. "The trillions of dollars needed for COVID recovery is money that we are borrowing from future generations."

British Prime Minister Boris Johnson urged the world to cooperate to tackle the "toxic tea cozy" of greenhouse gases now quilting the planet, while investors and businesses underscored their support for action.

"We call on companies and governments around the world to do all we can to make 2021 the year we turn the corner for good," said Apple Inc. Chief Executive Tim Cook.