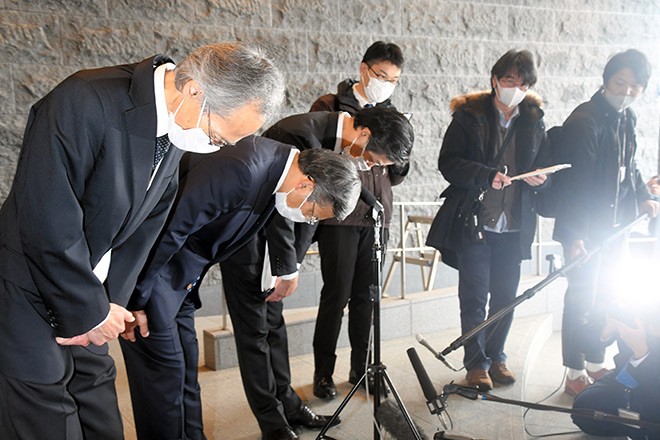 Hiroyuki Kobayashi, second from left, president of Kobayashi Kako Co., and other company executives apologize for the tainting of its athlete’s foot remedy with a sleep-inducing component in Awara, Fukui Prefecture, on Dec. 12. (Naoki Hirano)

AWARA, Fukui Prefecture--A drug maker here apologized for a “grave error” after a woman in her 70s in the Tokyo metropolitan area died from taking its athlete's foot medication that had a sleeping drug mistakenly mixed in.

“We made a grave error and are acutely aware of the gravity of our responsibility,” Hiroyuki Kobayashi, president of Kobayashi Kako Co., told reporters here on Dec. 12.

The woman died on Dec. 10 after taking the antifungal tablet while she was hospitalized.

The company will open a probe soon into the causal correlation between the death of the woman and the medication, Itraconazole 50 Meek.

Kobayashi Kako said a single tablet was mixed with 5 milligrams of a sleep-inducing component, 2.5 times the amount of a maximum dose normally applied.

It added that the company failed to notice the commingling of the ingredients with the sleeping drug in its quality control inspection conducted in July before the medication was distributed.

The tainted tablets, which amounted to 929 boxes containing 100 tablets each, were shipped between September and December after they were manufactured in June and July.

They were prescribed for 364 patients at hospitals in Tokyo and 30 other prefectures.

The company said 134 patients complained of detrimental health effects as of Dec. 11 and that there were reports of 15 traffic accidents that were deemed related to taking the tainted medication.

Kobayashi Kako said that containers of the ingredients used to treat athlete’s foot and induce sleep vastly differ both in terms of their shapes and materials.

The company said it will invite third party personnel to look into the cause of what it described as an “improbable mix-up” and draft measures to prevent a recurrence.

Kobayashi Kako usually keeps key components used to treat athlete’s foot in a pulp-based container that looks like a drum can and stands nearly 1 meter tall while sleep-inducing substances were stored in a flat container that is labeled.

The company rules dictate that two employees must work as a team when medication ingredients are taken out and mixed.

The drug maker said that there was a period that only one employee performed the task and that the mix-up may have occurred during that time.

The Fukui prefectural government conducted an onsite inspection of the company on Dec. 9 on suspicion that the company breached the pharmaceutical and medical device law.

(This story was written by Naoki Hirano and Akari Onishi.)