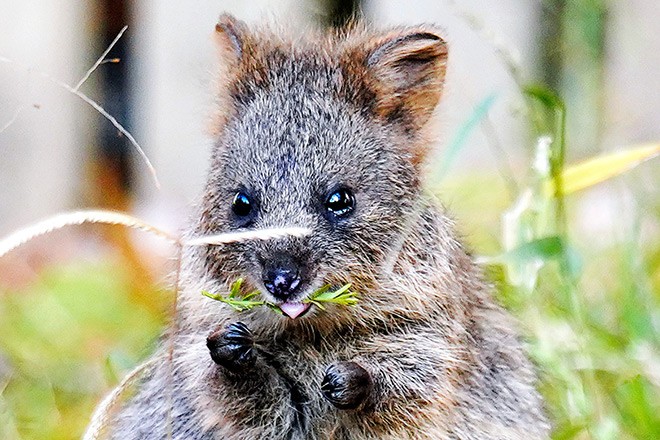 With its beady eyes and chubby face, the quokka, a type of small kangaroo, is referred to as “the world’s happiest animal” because its mouth often curves in the shape of a smile.

The Saitama Children’s Zoo in Higashi-Matsuyama, Saitama Prefecture, is the only zoo in the world to exhibit the marsupial outside Australia, its native home.

They grow to between 40 and 50 centimeters tall and weigh two to four kilograms. The animal has a muscular jaw, with the corners of the mouth upturned, because it eats shrubs and hard tree nuts.

In March 2020, the Saitama zoo was presented with two female and two male quokkas by the Featherdale Wildlife Park in Australia to celebrate the 40th anniversary since its opening.

But the animals did not go on public view until July due to concerns about the novel coronavirus pandemic. But with the long-awaited births of two cubs, the zoo attracts an average of 1,000 visitors on weekends and holidays.

The zoo currently keeps six quokkas, exhibited for two hours on weekdays and three hours on weekends and holidays.

According to zoo attendant Ayumi Terauchi, because quokkas are curious animals and sometimes approach visitors, it is advised not to lean over the divider or make loud noises.

The quokka is designated as an endangered species. Its population has sharply declined due to their reduced habitat ranges stemming from deforestation and damage caused by domestic animals and foxes brought to the island from the mainland.