Video footage from Nov. 27 shows a motion-sensor system that allows visitors to ring a bell without yanking on a cord at Sanadajinja shrine in Ueda, Nagano Prefecture, as a way to prevent the spread of the novel coronavirus. The popular shrine, associated with the feudal warrior Sanada Yukimura (1567-1615), has also placed social-distancing markers for visitors to position themselves on. (Takayuki Kakuno) 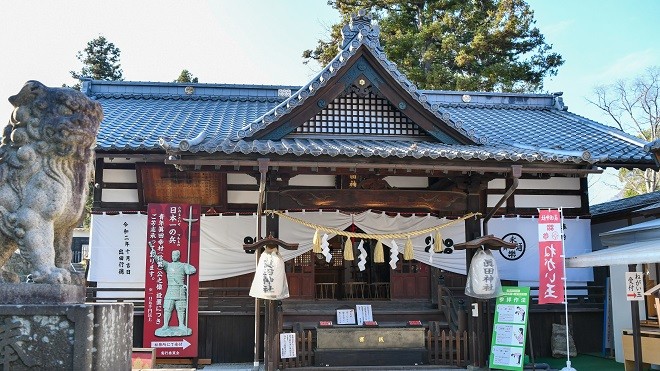 Sanadajinja shrine in Ueda, Nagano Prefecture, which is improving its measures to combat the novel coronavirus, is seen on Nov. 27. (Takayuki Kakuno)

The COVID-19 pandemic wasn't letting up, but visitors were still pouring in to visit the shrine honoring a famous warlord, recently popularized in a TV drama and video games.

And each one risked contracting and spreading the virus by pulling the rope to ring the shrine's prayer bell as many others had touched it.

When the pandemic's first wave struck this past spring, Takami Imai, 63, removed the scoops visitors used at the shrine's water purification basin to wash their hands to stop them from getting infected.

She took the prayer bell down, too, and the rope used to ring it, but she knew visitors would still “surely hope to ring the bell.”

Imai was racking her brain over how to ensure people could pray safely when one day while watching worshippers at the shrine she oversees she hit upon the electronic doorbell to signal a visitor's arrival at the entrance.

Imai then thought of installing an electronic sensor that visitors could swipe to trigger a sound in the place of the actual bell, and tapped Ueda Kenso, a local contractor responsible for maintaining Sanadajinja’s precincts, to rig it up.

Ueda had the sensor up and running in June.

Simply placing one's hands over the sensor in the worship hall of the shrine, devoted to Sanada Yukimura (1567-1615), produces the sound of an electronic bell.

Imai said she hoped the hands-off set-up would let people “pay their respects without any worries during the difficult situation” caused by the pandemic.

Since slews of worshippers are expected to come to the shrine to pray for the new year, Sanadajinja is acting to increase its anti-virus measures.

Sanadajinja, situated on the former site of Ueda Castle, is famous for enshrining the warlord Yukimura, who has been featured in a history drama aired by Japan Broadcasting Corp. (NHK) as well as video games.

Visitors can quickly reach the shrine by going through a castle gate.

Though the pandemic has made many in Japan refrain from venturing out, the shrine has still seen a steady stream of worshippers, including repeat visitors and group sightseers that utilized the government's Go To Travel tourism promotion program.

One day in late November, three women in kimono threw coins into the box for offerings in front of the worship hall, and then held their hands by the sensor about the size of a lunch box, causing a bell to ring from a speaker.

“I'm worried about the coronavirus, but I still wanted to ring the bell,” said Risa Seto, 26, who came to the shrine from Sano, Tochigi Prefecture.

As part of other efforts to reduce the contact risk as much as possible at the shrine, Imai has shifted “omikuji” fortunes to a board so they can be picked up individually instead of being pulled out of a box by hand as usual.

An automatic sprayer for visitors to sanitize their hands has also been installed.

Imai is still thinking of other ways to combat the virus.

“Shrines provide a place where anyone can express appreciation for good things that happened in the year and reflect on themselves for improvement,” she said. “I intend to protect that space.”