Growing alarm in Osaka as virus cases surge among children 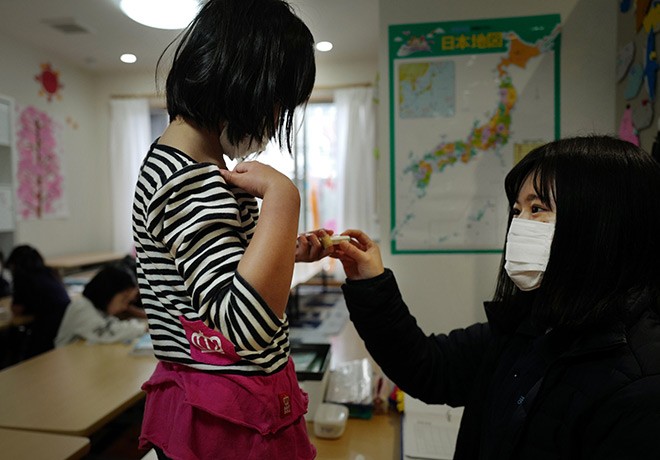 OSAKA--As Japan grapples with a third wave of the COVID-19 pandemic, health officials here are coming to the grim realization that children, previously considered to be less at risk, can be just as susceptible to the deadly disease as the rest of the population.

Osaka Prefecture has reported more than 300 new COVID-19 cases daily over the past week, and schools in the capital city are scrambling to minimize the threat with school closures and other measures.

In November, 141 children who attend schools and childcare facilities in the city contracted the virus. The figure was more than double the previous record marked in August when the nation was in the grip of a second wave of the pandemic.

In most cases, the children contracted the virus at home, officials said.

According to Osaka City’s board of education, 95 children who attend public kindergarten, elementary, junior high and high schools tested positive for the novel coronavirus in November, nearly four times the figure in October, when there were 24 cases.

It was also more than double the previous record of 42, marked in August.

Cases confirmed in the prefectural capital in November, irrespective of age, totaled 3,730, or 1.4 times more than the August figure of 2,587.

A record 15 schools and kindergartens were forced to temporarily shut in November due to the spike in cases.

Under the education board’s guidelines, a school is required to temporarily shut if any child or member of staff tests positive for the novel coronavirus. This is to allow public health centers to try to track those who were in close contact with the patients and sanitize the campus.

In many instances, schools closed for only a day or so.

Cases of infection also spread among children who attend certified and uncertified childcare facilities, orphanages or facilities for afterschool activities.

Of the 141 cases in November, 46 children fell into that category.

The November figure was 11.5 times higher than the four in October, and double the 23 confirmed in August.

In November, a record 47 such facilities reported at least one case of COVID-19, compared with 27 in August.

Most of the children displayed mild or no symptoms, city officials said. Many tested positive after a family member was confirmed to have COVID-19.

The number of people who contracted the virus from a family member in the same household has also been rising across the prefecture, prefectural authorities said.

Osaka City’s education board has urged schools to take steps to prevent the virus from spreading from homes to schools.

On Dec. 3, prefectural authorities issued a “red alert” to warn the public that the level of pandemic had reached the state of an emergency.

The following day, the board urged preschoolers and school children not to attend if a family member was running a fever and displaying cold-like symptoms.

Prior to that, it had mandated that multiple members in the same household had to have symptoms.

The board also reiterated that children and teaching staff must follow anti-virus health protocols, such as wearing a mask and ensuring they congregate in well ventilated venues.

The city’s public health center said there had been at least one case where children who played together with an infected child during the break and afterschool were deemed to have been in close contact with the individual.

Health officials acknowledged it is hard to thoroughly enforce mask protocols at childcare facilities. Children and nurses are often in close contact. For this reason, the center has sometimes deemed an entire class was in close contact with an infected person.

(This article was written by Yuka Honda and Yukiko Nagatomi.)