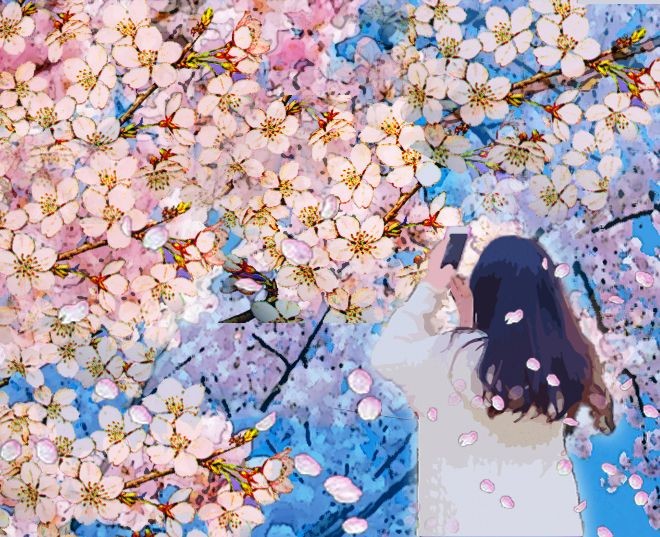 the cherry blossoms
the smiles--
yet the talk of the (c)old war
--T.D. Ginting (Murakami, Chiba)

ancient heroes
only spring cares for the flowers
on their graves
--Eugeniusz Zacharski (Radom, Poland)

a thorn pulled out
of the Christ’s crown
redbreast
--Luciana Moretto (Treviso, Italy)

The haikuist observed Good Friday. In Milan, Italy, Eufemia Griffo alluded to the belief that following his crucifixion Jesus Christ was buried in a rock cave, named the garden tomb by Protestant worshippers. Horst Ludwig marked a sign of the cross on the Day of Ashes.

temple ruins
a pilgrim’s whispered prayer
sculpted in the rock

The British poet W.H. Auden (1907-1973) composed “Musée des Beaux Arts,” a 1938 prewar poem that reimagined the painting “Landscape With the Fall of Icarus” by Pieter Bruegel the Elder. In the painting, both a farmer and a ship’s captain disregarded the drowning of a boy whose waxed-feather wings melted when he flew too close to the sun. Here, the poet’s opening three lines refer to the martyrdom of Christ and the human preoccupation with survival.

About suffering they were never wrong,
The old Masters: how well they understood
Its human position: how it takes place

In an 1893 essay referred to as his idle thoughts on literature, Masaoka Shiki (1867-1902) suggested Japanese haikuists were inspired to compose short poems because nature is simpler to write about than human nature. Here’s Kanematsu’s take.

Swallows back
the temple garden open
all the time

Shiki further explained, “To put it in another way, Japanese poets have rarely attempted to celebrate the peace and happiness of our people by considering human society in all its complications and proclivity for change.” Kanematsu invited a Buddhist monk to recite sutras at the family altar.

Madhuri Pillai pitied the hunted-looking eyes of a hunter. Junko Saeki spotted the two white circles on the back of a tiger’s ears at Ueno Zoo in Tokyo. Writing ekphrastic poems in snowy Joetsu, Niigata Prefecture, Yutaka Kitajima was enticed by Pieter Bruegel the Elder’s (1525-1569) artwork “The Hunters in the Snow.”

owned and sold
the narrative in his eyes...
white tiger

white tiger
in the snow
only his eyes...

Taking a seat in Nairn, Scotland, Xenia Tran rested at the site of a battle fought on April 16, 1746.

Culloden moor
the grass beside the bench
a paler green

parkland
a panorama
of green

Black blooms are an ominous sign for Kanematsu. Zoran Doderovic fell in love under the heady blossoms and heavily grooved black bark of a mature tree in Novi Sad, Serbia.

nightingale
the first time I sing
in a YouTube video

robins
in the yard catching
my attention

Kanematsu experimented with the linguistic style of his haiku by placing African violets in the foreground and a view outside his kitchen window in the background. Normally, it is redundant to inform the reader that snow is “outdoors,” or that you are “watching snow.” The seasoned writer demonstrated how isolation has created many “I’m here” and “you’re there” type of separations.

Snow outdoors
Saintpaulias in bloom
on my desk

Watching snow
beyond the window
with hot tea

Hot green tea complements the taste of “wagashi,” a traditional Japanese sweet made of rice flour and agar jelly topped with seasonal flower petals or leaves. It was taking a while for the cherry blossom front to reach Yutaka Kitajima in Joetsu, Niigata Prefecture, so the impatient haikuist shopped at the confectioners.

Hot tea infused with cherry blossoms has a delicate color and aroma. Tsanka Shishkova awoke at dawn to hunt for the subtle floral fragrance in Sofia, Bulgaria: the scent of blossoming cherry early morning. Bedi preferred “sencha,” which is prepared by infusing whole tea leaves in hot water.

morning buzz
how calming the scent
of green tea

It’s always a Good Friday reading haiku in the Asahi at https://www.asahi.com/ajw/special/haiku/.
The next issue of the Asahi Haikuist Network appears April 29. Readers are invited to send haiku about hunting on a postcard to David McMurray at the International University of Kagoshima, Sakanoue 8-34-1, Kagoshima, 891-0197, Japan, or e-mail to (mcmurray@fka.att.ne.jp).