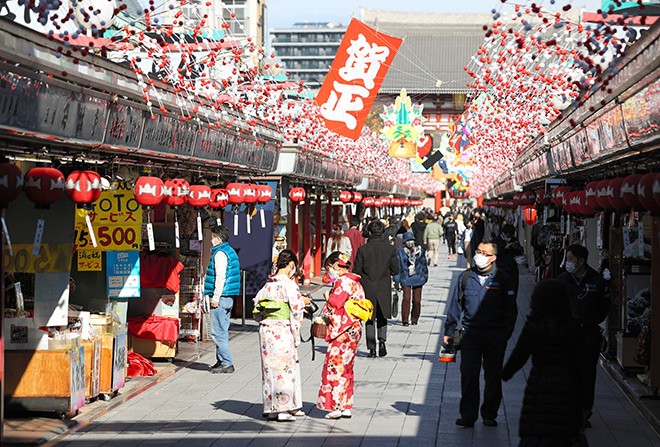 The crowd is relatively thin in Asakusa’s Nakamise shopping street in Tokyo on Dec. 14. (Nobuo Fujiwara)

Prime Minister Yoshihide Suga, citing the record-setting spread of the novel coronavirus, said Dec. 14 the government will suspend its Go To Travel campaign throughout Japan from Dec. 28 to Jan. 11.

“We decided to take the utmost measures to stem the further spread of infections and reduce the burden on hospitals so that people will be able to welcome a calm and peaceful new year,” he told a meeting of the government headquarters for novel coronavirus countermeasures.

Suga also pledged to double the amount of relief payment to doctors and nurses tending to COVID-19 patients, as well as restaurants that will reduce operating hours.

In addition, the prime minister told the meeting that Tokyo and Nagoya, both reeling from surges in COVID-19 cases, will be removed as destinations under the Go To Travel program until Dec. 27.

Japan has recently posted record daily highs in the number of new COVID-19 cases, and the Suga administration has been under pressure from health experts to suspend the Go To Travel program.

Visits to Sapporo and Osaka, two other hard-hit cities, have already been removed from the tourism-promotion campaign.

But Suga had shown a reluctance for call for a nationwide suspension of the program.

The central government and the Tokyo metropolitan government on Dec. 1 only urged people 65 and older as well as those with underlying diseases not to travel to and from the capital until Dec. 17 to rein in the increase in new infections.

Suspension from the Go To Travel campaign will mean that people of all ages and medical conditions will be ineligible for the program’s discounts for trips to Tokyo.

But for people who live in Tokyo, they will be asked to refrain from using the subsidy program for travel outside the capital.

The central government had suggested that the request to avoid travel apply only to those residing in Tokyo’s 23 central wards.

However, metropolitan government officials decided that the request should cover all people under their jurisdiction, not just those in the wards.

Tokyo has been under pressure to take additional measures to stem the spread of the disease in the capital. Tokyo reported a record 621 new COVID-19 cases on Dec. 12.

The metropolitan government plans to request restaurants and karaoke parlors that serve alcohol to extend the period for closing by 10 p.m. until possibly Jan. 11. The initial request was supposed to expire on Dec. 17.

The central government’s expert panel on responding to the health crisis called for a more forceful approach, asking Tokyo officials to ask such businesses to close by 8 p.m.

But the metropolitan government would not budge, according to sources.

On Dec. 14, Aichi Governor Hideaki Omura indicated that the removal of Nagoya, the Aichi prefectural capital, as a destination under the Go To Travel campaign was inevitable.

“We will need to strengthen measures against the coronavirus to help maintain the health care system in the prefecture,” he said at a news conference.

Omura noted that the campaign has helped the tourism industry in his prefecture. But he said the public health crisis has deepened.

The central Japan prefecture has recently reported around 200 new COVID-19 cases a day, and the number of patients hospitalized for the disease reached a record high of 487 on Dec. 13.

“Now, we have no choice but to ask people in the prefecture to cooperate with anti-virus measures because people’s lives come first,” Omura said.

The governor said the prefectural government is considering extending the period for restaurants and other business establishments in some sections of central Nagoya to reduce or suspend operations, possibly until Jan. 11.