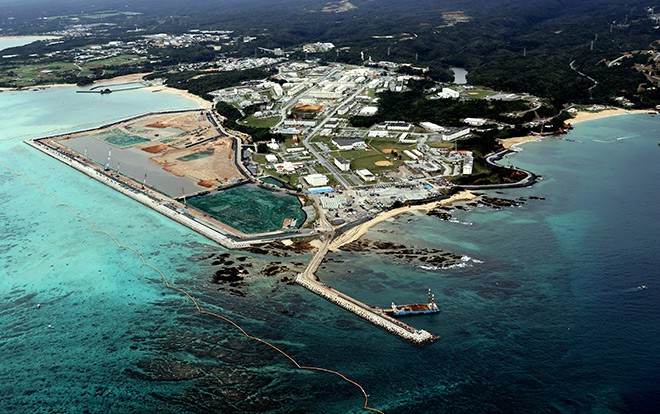 The planned reclamation area off the Henoko district of Nago, Okinawa Prefecture, on Dec. 11. Reclamation in the central portion is completed. The soft seabed lies in the area to the right. (Eiji Hori)

In his policy speech at the opening of the extraordinary Diet session on Oct. 26, Prime Minister Yoshihide Suga pledged to reduce the burden of the heavy U.S. military presence in Okinawa Prefecture.

Suga promised to do so in a way that “shows sympathy and solidarity” with people in the prefecture.

This phrase was repeatedly used by Suga’s predecessor, Shinzo Abe, when he talked about issues related to U.S. military bases in the prefecture.

But Abe stopped using the phrase after he was criticized for failing to match that rhetoric with actions. Suga, who served as Abe’s chief Cabinet secretary, must be well aware of this fact.

So his use of this particular wording raised hopes of change in the government’s policy concerning the problem. However, the nearly three months of his leadership have dashed those hopes.

Land reclamation work for a fiercely disputed and deeply troubled project to build a new U.S. military facility off the Henoko district of Nago, a city in the prefecture, has continued, flying in the face of strong opposition from people in the prefecture.

Two years have passed since the government started dumping dirt into the sea under a plan to cover a quarter of the area to be reclaimed by September next year.

But the amount of dirt that was thrown into the area by the end of November was less than 4 percent of the estimated volume needed.

That is because work has yet to start for parts of the reclamation area where a large swath of ground under the seabed is believed to be “as soft as mayonnaise” and deeper than 70 meters, the maximum possible depth for work to shore up the ground.

Referring to the project to build a new air facility that should take over the functions of U.S. Marine Corps Air Station Futenma in Ginowan, also in the prefecture, in its report published in November, the Center for Strategic and International Studies, a reputed U.S. think tank, said, “It appears unlikely that this will ever be completed.”

By now the need for a wholesale review of the Henoko base plan is beyond debate. The government should make a hard-headed reassessment of whether this project really makes sense without trying to protect special interests or save face.

The government claims the Futenma replacement facility is vital for national security. In recent years, however, China’s enhanced missile capabilities have raised concerns about the concentration of U.S. military bases in Okinawa, both inside and outside Japan.

A review of the U.S. Marine Corps’ strategy is also under way, with the new U.S. administration of President-elect Joe Biden set to be inaugurated in January.

The time has come for Japan to recast its security strategy in response to changing security policy assumptions and projections of future prospects.

The operation of the Futenma air base--removing the safety threat posed by the base in a densely populated area is the original purpose of the Henoko project--has also made a laughingstock of the pious promise of “sympathy and solidarity” with local residents.

The number of aircraft landings and takeoffs at the base increased nearly 25 percent from 13,581 in fiscal 2017 to 16,848 in fiscal 2019, due in part to work at the nearby Kadena Air Base that made part of the U.S. Air Force base unusable, according to the Okinawa Defense Bureau.

There have been many reports of U.S. military aircraft flying over schools and day care centers as well as a series of accidents involving U.S. military helicopters, including ones in which parts fell off aircraft and dropped to the ground.

The government has also failed to deliver on its promise to terminate the operation of the Futenma base by February 2019. The prefectural administration asked the national government to set a new deadline, but Defense Minister Nobuo Kishi flatly rejected the request, saying the termination of the Futenma base is premised on “local understanding and cooperation” for the Henoko base plan.

It is intolerable for Kishi to make such remarks, which border on blaming the situation on Okinawa, despite many flaws and problems in the government’s approach, including its defective seabed survey, cover-up attempts and strong-arm tactics, which incurred the wrath of local residents.

“Sympathy and solidarity” with local communities should mean taking effective steps to improve things for people in Okinawa from the standpoint of the original purpose of removing the safety threat posed by the Futenma base.

They need to include ensuring that the U.S. military will reduce and relocate military exercises at the base, strictly observe the established rules concerning flights of military aircraft and take measures to prevent accidents.

Suga must honor his promise, made in front of elected Diet members, representative of all the people.