Protests over Henoko base project move into their 3rd year 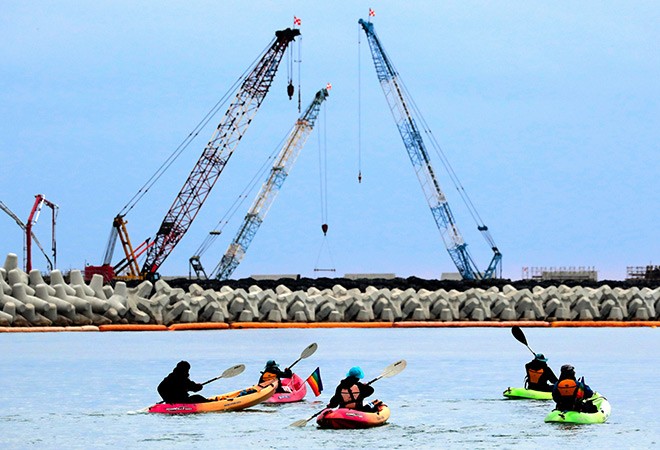 NAGO, Okinawa Prefecture--Protests over reclamation work to build a new U.S. base marked the start of their third year Dec. 14 when 40 or so people staged a ritual sit-in outside the U.S. Marine Corps Camp Schwab here.

The central government is relentlessly pushing ahead with the project despite fierce opposition among Okinawans. The reclamation work involves dumping tons of earth and sand into the sea off the Henoko district.

The massive undertaking is aimed at relocating the functions of the U.S. Marine Corps Air Station Futenma in Ginowan, also in Okinawa Prefecture.

Protesters focused on Camp Schwab where construction trucks move in and out to the reclamation site from early morning most days.

“I am very angry with the central government because it ignores the objections of the majority of Okinawans,” said Toshiko Nakamura, 68.

She used to come to the Henoko district every time she visited the southernmost prefecture from Tokyo, and in March finally put down roots in Nago by moving here.

“Even though the Japanese people gave their OK to this government, I intend to continue raising my voice,” Nakamura said.