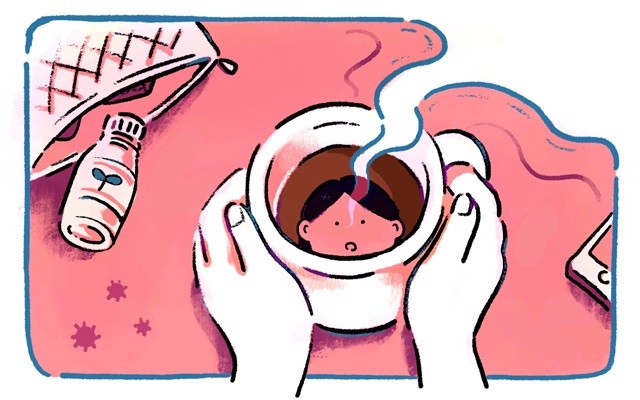 Editor's note: This is the final entry in a three-part series touching on the experiences of Asahi Shimbun reporter Yuri Imamura who was infected with the novel coronavirus in March. The reporter still experienced symptoms even after being discharged from the hospital. She hopes by sharing her personal account, including the difficulty of quarantining herself from her family, that it will lead to people being more aware of the difficulties of the disease.

COVID-19 inpatients can be retested in a polymerase chain reaction (PCR) test if they have a fever below 37.5 degrees and are asymptomatic for two days.

If a negative result occurs twice in a row within a specified period, the patient can be discharged.

On the fifth day after I was readmitted, I had a PCR retest because I met the first condition.

The next day, a negative result was confirmed, and the doctor said, "This is good for you."

Thinking that all the difficulties that I had been through were finally over, I sent a message to my family with a joyful emoticon, "If I get a negative result again, I can leave the hospital on that day!"

However, after that, I had a fever of nearly 38 degrees and I could not say that I was in a recovered condition.

While waiting to take a second retest, the doctor entered my room with a disappointed look.

"The first result may be a false negative, so it was judged invalid," she said.

For a moment, I couldn't understand what she was talking about. She explained that according to my symptoms, the negative result of the retest was a false negative due to the level of accuracy of the test and that meant it was difficult to say that my body had completely recovered from the virus infection.

"I know you were looking forward to being discharged, but I'm sorry."

The doctor's words over her protective goggles made me feel like she was reading my heart as I covered my face with both hands.

KEEPING AWAY FROM COVID-19 NEWS

On TV, a report said that the number of infected people around the world had exceeded 2 million.

I changed channels, but there were no programs that were not related to the novel coronavirus. It became hard to watch, and I turned off the TV that I had always kept on since I was hospitalized.

I stopped looking at Twitter, Facebook, and news sites for a while. I covered my ears with my earphones and continued listening to music.

I rested for two days after I received the "false negative" result. My second PCR retest was conducted on April 17, and it turned out to be negative. The next PCR test I took was on April 20, and I was confirmed to be negative again.

I had no fever, and I was finally given permission to leave the hospital. It was 15 days after I was first hospitalized and 24 days after the onset of symptoms.

When I was told of my second negative result, a 60-year-old woman in the same room was told she was still positive. I was very surprised because her first result was negative and her physical condition seemed to be very good.

"I'm envious of you for being able to leave the hospital first," she said.

NEVER GIVE UP HOPE

We then spoke to each other. The woman told me she had a chronic illness and that she was infected despite being very careful not to go out and paying close attention to her surroundings.

I told her about how I was hospitalized again from the hotel and my experience with my false negative.

The woman said, "It's a really troublesome illness, but I have to overcome this and never give up."

As I walked out of the room and passed in front of the nurse's station, I saw the doctor who informed me about my false negative. I bowed to her and said, "Thank you so much."

Then she told the other nurses "Imamura-san is leaving the hospital." The doctors and nurses who were there turned to me and said, "Congratulations!" They saw me off with their applause ringing in my ears.

Although I was once overwhelmed by the harsh conditions I faced, I was now filled with gratitude to the medical staff who saved my life. I bowed again and left in high spirits.

My husband and two sons picked me up outside the hospital entrance with our car. Although all of us wore masks, my husband hugged me and said, "Welcome back."

My 3-year-old son jumped up at me yelling, "Mama!" My 1-year-old baby boy at first seemed perplexed but after a while, he grabbed one of my legs and wouldn't let go.

Even after I got home he would shout in panic if I were to disappear from his sight even if I just went to the toilet.

For the past three weeks, I worried about his anxiety and hugged him saying, "Mama is fine." It was such a happy thing to be able to hug my children. I was grateful to get back to my daily life.

In mid-May, my husband underwent an antibody test at a private medical facility at his own expense and was confirmed to be negative. I was relieved that my home isolation was successful in keeping my family safe.

FIGHT STILL NOT OVER

For a week after I was discharged I had headaches and felt lethargic, but I started to taste coffee again. At first, I tasted the sweetness of a small portion of sugar, and then I tasted the bitterness of black coffee.

After two weeks, my headache disappeared, and I could smell essential oils again. I felt that my body was returning to normal.

However, even five weeks after being discharged, there were smells that I still couldn't recognize. One was child's poop. I didn't understand why my second son was crying until I saw feces leaking out of his diaper.

As a parent, I was shocked that I didn't notice the smell. In addition, I couldn't smell my usual shampoo and conditioner, which are supposed to have a menthol scent.

My fight against being infected with the novel coronavirus will continue for some time.