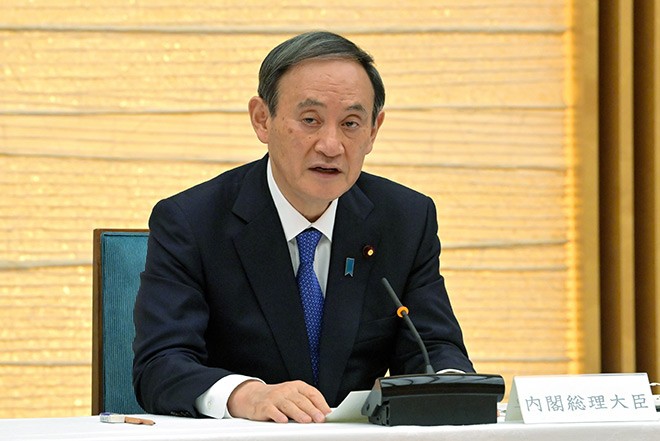 Prime Minister Yoshihide Suga announces at a government task force meeting on Dec. 14 dealing with the novel coronavirus pandemic that the Go To Travel program will be suspended across the entire nation. (Kotaro Ebara)

Suga had stubbornly refused to heed the advice of health experts to curtail or suspend the Go To Travel tourism promotion program after new COVID-19 cases started rising around the nation.

Not only had Suga pushed the program, but his close associates also insisted that no evidence existed that the campaign was directly causing an increase in new infections.

But the prime minister changed course on Dec. 14, saying the program would be suspended nationwide from Dec. 28 to Jan. 11. He urged citizens to spend a quiet time at home over the year-end and New Year period rather than visit their families in their hometowns.

Government officials said prospective travelers will not have to pay cancellation fees if they complete the necessary paperwork by Dec. 24 for planned trips during the suspension period.

When asked what was behind Suga’s sudden decision, a source in the prime minister’s office said: “Recent public opinion surveys had an effect. The administration would have suffered major damage if nothing was done.”

Results of a nationwide poll released on Dec. 14 by Japan Broadcasting Corp. (NHK) found the approval rating for the Suga Cabinet had declined by 14 percentage points from the previous month to 42 percent. The disapproval rate rose 17 points to 36 percent.

In addition, only 12 percent of respondents said the Go To Travel program should be continued, compared with 79 percent who said it should be suspended.

A Dec. 12 survey by the Mainichi Shimbun found 67 percent of respondents wanted the program stopped, while only 19 percent said it should keep going.

The Cabinet approval rating also fell by 17 points to 40 percent in the survey.

Before Suga’s announcement, the central government had only called for minor tweaking of the Go To Travel program, despite the calls from late November by experts for stronger measures to prevent a further spread of novel coronavirus infections.

In fact, some experts said Suga’s decision was too late, given that many hospitals around the nation are now facing shortages of medical staff and beds for COVID-19 patients.

“There was a need to stop the program about a month ago because of the pressing situation at medical institutions,” Yoshihito Niki, a visiting professor of infectious diseases at Showa University, said.

Niki also questioned why the central government did not call for an immediate suspension of the Go To Travel program and instead decided to wait until Dec. 28.

The situation regarding daily new cases and COVID-19 patients with severe symptoms has worsened since the start of December.

But the inaction on the part of the central government was likely behind the slower decline in foot traffic around some major train stations in the country.

Moreover, nothing has been done about suspending the Go To Eat program that promotes dining out at restaurants and bars.

Satoshi Hori, a professor of infection control at Juntendo University in Tokyo, said restrictions should also cover the Go To Eat program because dining parties have been sources of spreading infections in urban centers.

(This article was compiled from reports by Keishi Nishimura, Takashi Narazaki, Kenta Noguchi and Hiroshi Ishizuka.)