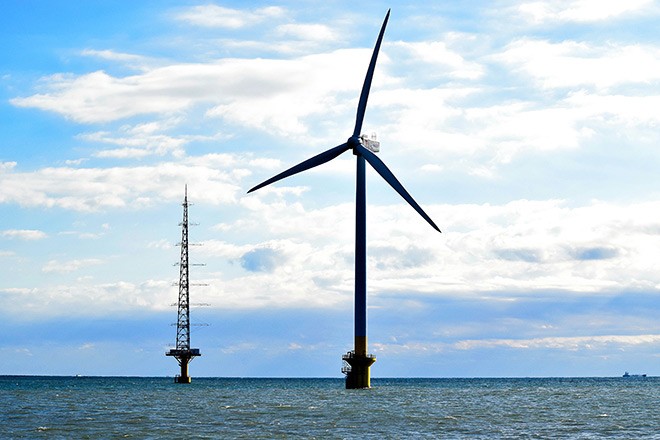 Offshore wind farms will generate the equivalent amount of electricity produced by 30 to 45 nuclear reactors by 2040 under ambitious plans announced Dec. 15 to promote sources of renewable energy.

The goal is to raise output from the current 10 to 20 megawatts to 30 to 45 gigawatts over the next two decades.

A committee comprising members of the public and private sector agreed on the new target and announced it later the day.

The target is part of a green growth strategy to be compiled by the year-end to achieve Prime Minister Yoshihide Suga’s recently stated goal of bringing down greenhouse gas emissions to net zero by 2050.

The government had set a target of having renewable energy account for 22 to 24 percent of the country’s total energy generation mix by fiscal 2030. With the new goal of bolstering offshore wind power generation, calls for raising the overall target for renewable energy will likely grow further.

The beauty of offshore wind farms is that they can be built almost anywhere. Europe already generates more than 20 gigawatts in wind power, far outpacing Japan.

The Japanese government initially planned to increase the capacity to 820 megawatts by fiscal 2030, but will raise the target to 10 gigawatts by around 2030 and to 30 to 45 gigawatts by 2040.

The industry ministry and other parties are moving to encourage businesses to invest in offshore wind power projects by setting the new long-term target to nurture the business.

It set up the public- and private-sector committee in July to discuss ways to enhance the competitiveness of the industry.

Even though Japanese manufacturers withdrew from the business of producing wind turbines for offshore wind power generation, the ministry set a goal of domestically procured parts accounting for 60 percent of total outlays, including the costs for installing wind turbines, by 2040, according to sources.

The ministry also intends to reduce the financial burden on consumers by lowering the cost of offshore wind power generation to 8 to 9 yen (7 to 8 cents) per kilowatt-hour between 2030 and 2035.

The government will almost certainly need to coordinate with local fisheries cooperatives and other parties to build offshore wind farms and secure power lines to transmit electricity generated by those facilities to urban areas.