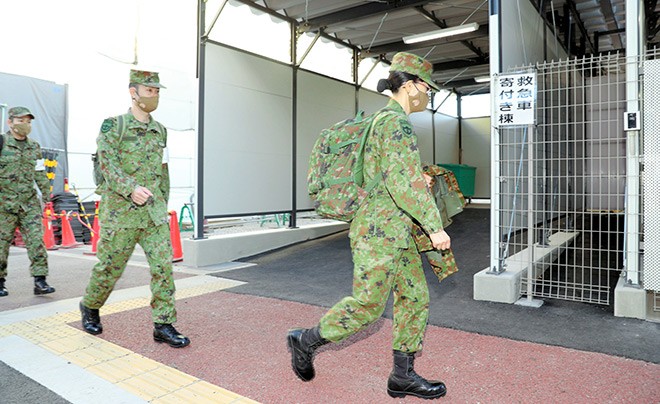 Health care workers from the Self-Defense Forces arrive at a temporary hospital for serious COVID-19 cases in Osaka’s Sumiyoshi Ward on Dec. 15. (Pool)

OSAKA--An emergency hospital set up for COVID-19 patients in serious condition opened here on Dec. 15 with a medical staff cobbled together from the Self-Defense Forces and other sources.

The hospital began operating with five of the planned 30 beds as the prefecture’s hospitals to treat seriously ill coronavirus patients are nearing capacity.

As of the beginning of this month, Osaka prefectural officials could secure only about 50 nurses of a total of about 130 needed to staff the temporary facility.

But they assembled the desired number of health care workers after requesting the dispatch SDF’s medical personnel for disaster relief, as well as nurses from other hospitals in the prefecture and elsewhere.

Shortly past 8 a.m., a nurse from the SDF’s National Defense Medical College and two assistant nurses from the Ground SDF’s medical corps arrived at the emergency facility. The new hospital opened on the grounds of the Osaka General Medical Center in the city’s Sumiyoshi Ward.

SDF medical staff are tasked with assisting doctors, as well as managing ventilators and caring for patients, among other duties.

As of Dec. 14, 75.7 percent of beds secured for serious cases were occupied. But the occupancy rate rises to 81.7 percent of the 191 beds that are immediately available for such patients.

The Defense Ministry will deploy seven health care workers to the hospital and Osaka Prefectural Nakakawachi Emergency and Critical Care Center in Higashi-Osaka city between Dec. 15 and Dec. 28.

The SDF has about 1,000 registered nurses working at its 16 hospitals and medical offices inside SDF bases around the nation.

In addition to their regular tasks, the nurses undergo training to prepare for deployment in contingency operations and aid activities overseas.

Apart from registered nurses, there are 2,000 SDF personnel who are licensed assistant nurses.

Caring for coronavirus patients in Osaka Prefecture is not the first time that SDF nurses have rendered assistance during the COVID-19 crisis.

From February to March, they were dispatched to the Diamond Princess, a cruise ship quarantined in Yokohama Port when an outbreak occurred aboard, to assist doctors.

In August, they flew to Okinawa Prefecture to work at hospitals after cases spiked there.

But extending assistance beyond their normal duties does not mean that SDF nurses can always be called upon to do so, according to an official close to the Defense Ministry.

“They are pretty much tied up with their regular responsibilities at their own hospitals,” the official said.

SDF personnel will be sent for disaster relief if the central government deems a request for the dispatch meets three conditions: the assignment is of a public nature, has an overriding urgency and cannot be performed by another entity.

But Motoki Terui, a former senior member of the SDF’s medical corps who was involved in relief operations in the 2011 Great East Japan Earthquake and tsunami, stressed the importance of building the health care system through the collaboration of local regions, ahead of calling in the SDF.

There are about 1.6 million registered and licensed assistant nurses in Japan, according to the health ministry.

"If the SDF has a shortfall of its own nurses, it may jeopardize emergency response in the event of a natural disaster," said Terui, a part-time lecturer of disaster medical care with the University of Ryukyus in Okinawa Prefecture.