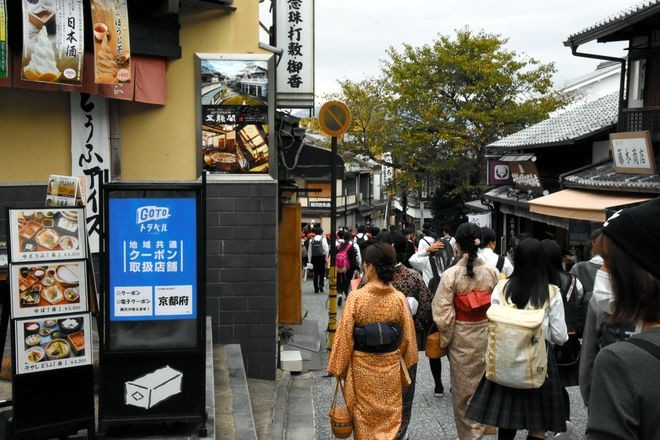 "Hojokin to Seikento" (Subsidies and party in power), a book by former Asahi Shimbun political reporter Michisada Hirose, begins with this observation: "Subsidies are a convenient tool of governance for the government in power."

Hirose continues, "The government remains in the background, from where it tightens or loosens the purse strings of subsidies to lead the recipient in the desired direction."

He also nails down the essence of subsidies by pointing out that they do not scream "power" in the way laws and official notices do.

Published in the 1980s, the work examines how agricultural and public works subsidies became bloated until they were extremely difficult to cut back.

Times have changed, and the current government appears to have skillfully led the public with its "travel subsidies" for the entire nation, better known as the Go To Travel tourism promotion campaign.

I think the program proved meaningful to a certain degree, because it served to counterbalance the government's excesses at one time in condemning any trip across prefectural borders as if it were an unforgivable crime.

But once past that phase, I believe the Go To Travel campaign's usefulness expired. Flaws in the program itself came to light, such as that even though flexibility is indispensable to infection control, suspending the program results in travel plan cancellations that are subject to hefty penalty fees. And adding to this absurdity is that taxpayer money is being used for the payment of penalties.

In the first place, the Go To Travel program is definitely not for those who don't have the luxury of being able to go on a holiday trip. And for front-line medical staff battling the pandemic, or anyone refraining from going out to minimize their risks of infection, the program is nothing short of unfair.

Some people are hailing the government's decision to suspend the program as a commendable political decision. But I couldn't disagree more.

All the government has done is to suspend the disbursement of taxpayer money in the form of tourism promotion subsidies.

How does the government intend to deal with the pandemic's "third wave"?

I have yet to hear a single meaningful word from Prime Minister Yoshihide Suga.