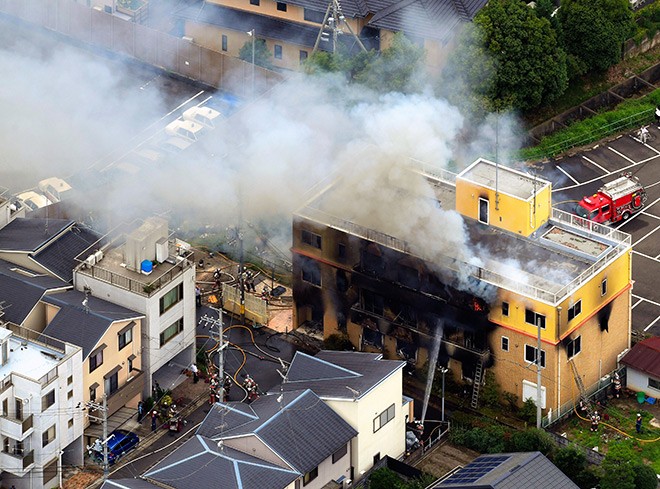 A studio of Kyoto Animation Co. in Kyoto was set on fire on July 18, 2019. (Asahi Shimbun file photo)

KYOTO—Prosecutors here on Dec. 16 indicted an unemployed man on multiple charges of murder and attempted murder over the arson attack against Kyoto Animation Co. last year that killed 36 workers.

Shinji Aoba, 42, will be tried under the lay judge system.

Aoba, from Saitama city, has admitted to setting fire to the studio and trying to kill as many people as possible, investigative sources said. His arrest and indictment were delayed until after he recovered from serious burns he suffered in the attack and underwent a psychiatric evaluation.

Based on the evaluation, investigators at the Kyoto District Public Prosecutors Office concluded that Aoba can be held criminally responsible for his actions. His detention period for those tests expired on Dec. 16.

Aoba said he attacked the three-story studio in Kyoto’s Fushimi Ward because Kyoto Animation stole novels that he had entered in a contest, the sources said.

But police found no evidence that the popular animation company, known as Kyoani, used any ideas of the suspect, according to the sources.

Aoba was taken into custody by police on July 18, 2019, near the site of the blaze. At the time, 70 employees and executives were inside the building.

Aoba is suspected of killing 36 of them and injuring the 34 others by setting fire to the studio with gasoline he brought. He told investigators that he used gasoline in the attack because he believed it would lead to a high death toll, the sources said.

He also had six kitchen knives in his possession in the attack, a violation of the swords and firearms control law, according to the sources.

Aoba was also badly burned in the attack and required about 10 months of hospitalization. His formal arrest by Kyoto police came on May 27 after authorities determined that he had recovered enough for detention.

He was transported to the Osaka Detention House on a stretcher for police questioning. The facility was selected because it can provide good medical services.

Investigators interrogated Aoba while he lay on his bed in his room. Precautionary measures were in place to ensure that he would not contract a virus, the sources said.

Prosecutors had experts conduct a six-month psychiatric evaluation of Aoba from June 9 to determine if he was mentally fit to face charges and stand trial.