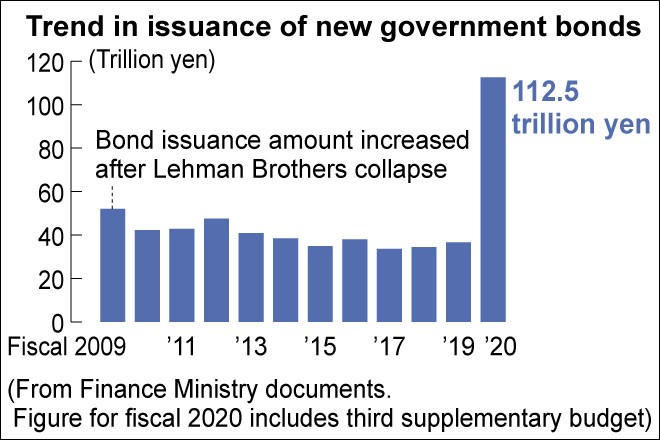 The government decided to issue new bonds worth 112.554 trillion yen ($1.1 trillion) for fiscal 2020 through next March, the first time the nation’s debt issuance will top 100 trillion yen in a single fiscal year.

This unheard-of amount is due to the impact of the novel coronavirus pandemic on the world's No. 3 economy and moves to make up for a shortfall in tax revenues triggered by the health crisis.

Expenditures in the third supplementary budget proposal for fiscal 2020 approved Dec. 15 by the Cabinet of Prime Minister Yoshihide Suga total 21.835 trillion yen to help pay for measures to deal with the health crisis and the blow to economic activity.

The package comes on the heels of measures to prop up businesses hurt by the spread of COVID-19 cases as well as stagnant corporate activity.

Lower-than-expected tax revenues will lead to the issuance of 22.395 trillion yen in new bonds under the third supplementary budget.

The total figure is more than double the amount of newly issued bonds in fiscal 2009 following the 2008 collapse of U.S. investment bank Lehman Brothers that triggered a global economic downturn. The 51.955 trillion yen in bonds issued in fiscal 2009 stood as a record figure until this fiscal year.

The third supplementary budget proposal will be presented to the ordinary Diet session set to convene in early January.

The latest supplementary budget proposal brings total government expenditures for this fiscal year to a record 175.688 trillion yen, about 1.7 times larger than the total for fiscal 2019, which was then a record.

For the second straight year, deficit-covering bonds will be issued because tax revenues are forecast to fall short of initial government projections.

The issuance of deficit-covering and other bonds means that an extraordinary 64.1 percent of government expenditures this fiscal year will be paid for by the government taking on debt.

Among key measures included in the third supplementary budget proposal, 4.358 trillion yen will be set aside to fight the spread of COVID-19. Of that amount, 573.6 billion yen will be used to prepare for vaccines against the novel coronavirus.

Funds will also be earmarked to strengthen the strained medical care structure in some parts of the country and raise the amount in subsidies paid out to businesses that comply with local government requests to shorten their business hours.

Figures show that 11.677 trillion yen has been set aside to nudge economic activity after the COVID-19 crisis is brought under control.

The central government's decision to extend the Go To Travel tourism promotion effort until June 2021 means that 1.031 trillion yen will be set aside for that purpose once the campaign resumes nationwide next year.

Officials said 2 trillion yen was earmarked to set up a fund to provide support to companies that strive to leave a zero carbon footprint by reducing greenhouse gas emissions.

Seed money of about 500 billion yen will go to a fund to provide research support to universities. The government's goal is to eventually expand the fund to about 10 trillion yen.

Responding to calls from the ruling coalition for measures to strengthen disaster prevention measures, a total of 2.260 trillion yen was included in the supplementary budget proposal.

The total of such economic and other measures comes to 19.176 trillion yen, with the remainder of the third supplementary budget intended to augment the expected reduction in local tax revenues.

The central government initially projected a record 63.513 trillion yen in tax revenues for this fiscal year, but that figure is expected to fall short by about 8.388 trillion yen.

To partially make up for the shortfall, surplus funds of 690.4 billion yen from the previous fiscal year as well as some of the reserve fund for this fiscal year will be used. Normally, about half of the surplus funds is used to repay government debt.