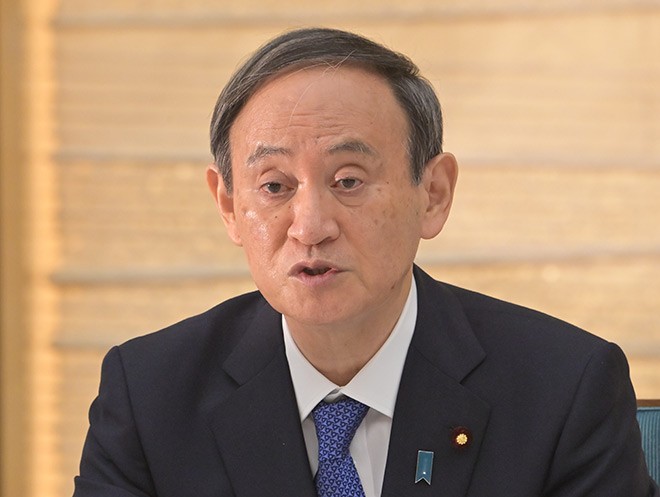 Prime Minister Yoshihide Suga on Dec. 14 before announcing the suspension of the Go To Travel campaign and attending a dinner party with more than five people, including lawmakers and celebrities, in Tokyo’s Ginza district (Kotaro Ebara)

After sending mixed messages about traveling during the COVID-19 pandemic, Prime Minister Yoshihide Suga raised further doubts about his seriousness in fighting the health crisis by attending a steak dinner party with celebrities.

The central government’s panel of experts on dealing with the novel coronavirus has called on people to refrain from holding dinner parties in groups of five or more because such large gatherings pose a high risk of contracting and spreading the virus.

But the nation’s leader on the evening of Dec. 14 attended a group dinner with more than five people at a steak restaurant in the Ginza district of the capital.

The government has defended the get-together, indicating it involved gathering a variety of opinions for Suga’s policies.

The fellow diners did include Toshihiro Nikai, secretary-general of the ruling Liberal Democratic Party and leader of a powerful faction in the party, and at least one other senior lawmaker.

Also in attendance at the party were TV celebrities and Sadaharu Oh, the baseball Hall of Famer who now heads the Fukuoka SoftBank Hawks.

TV cameras were rolling when Suga arrived at the restaurant as well as when he left. The footage generated immediate criticism.

Natsuo Yamaguchi, leader of junior coalition partner Komeito, said at a news conference on Dec. 15 that the dinner party may have sent the wrong message to the public.

“I want him (Suga) to be thoughtful about that from now on,” Yamaguchi said.

“Regarding dinner parties, politicians should take anti-virus measures and refrain from (attending) them as much as possible,” Tetsuro Fukuyama, secretary-general of the Constitutional Democratic Party of Japan, told reporters. “The prime minister should serve as a role model.”

The criticism continued at the Lower House Cabinet Committee meeting on Dec. 16.

Opposition lawmakers pressed Yasutoshi Nishimura, the government’s point man on battling the spread of COVID-19, to give his opinion on the steak dinner.

“(We) are not saying that having a dinner with five or more people is bad without any exceptions,” he said.

But Nishimura added that he wants Suga and others to “handle (the matter) while keeping in mind that such get-togethers have high infection risks.”

Tsutomu Sato, chief of the General Council of the LDP, confirmed at a Dec. 16 news conference that government-recommended limit is still five people for dinner parties.

“I think (Suga) took a lot of measures to have the (dinner), but based on the criticism, we, too, should straighten ourselves up,” Sato said.

“It is extremely important for a politician to meet people in various fields and hear diverse opinions,” Kato said at a news conference.

He also said the panel’s suggestion to refrain from “wining and dining in groups of five or more people” was “not a blanket decision.”

The steak was eaten shortly after Suga abruptly announced that the government’s Go To Travel campaign would be suspended nationwide from Dec. 28 to Jan. 11.

The announcement came as a surprise because Suga had until then pushed the travel-promotion program despite urging people to exercise caution against spreading the virus.

Suga explained that the suspension was part of “maximum efforts to prevent the infection from further spreading and to ease the burden on health care facilities so that people will have a quiet New Year.”

The prime minister also called on restaurants and bars that serve alcohol to shorten their business hours in the high season because many people have contracted the virus from wining and dining.

Governors of densely populated areas, including Tokyo and Osaka Prefecture, requested the targeted businesses to continue closing up early.

Suga’s behavior at the steak restaurant was also called into question.

The prime minister on Nov. 19 asked the public to have “quiet dinners” and to remember to put their face coverings back on when talking at the dinner table.

“I, too, will do it thoroughly from today,” Suga told reporters at the prime minister’s office.

Reporters asked Nikai on Dec. 15 if the steak dinner was a quiet one with masks.

“You can’t eat unless you take off a mask,” Nikai responded at a news conference. “Everybody was careful (about that).”

Jun Azumi, the Diet Affairs Committee chairman of the CDP, echoed the frustration of many people over Suga’s dinner party.

About the only thing that Azumi agreed with was Suga’s food choice.

“There is nothing wrong about steak. I eat it sometimes, too,” Azumi said.