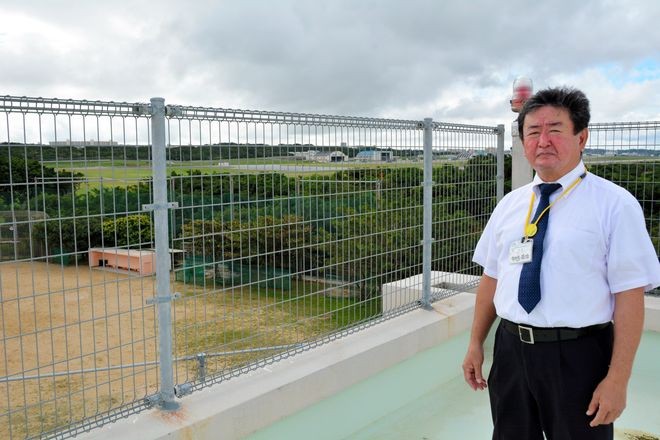 Katsuji Chinen, principal of Futenma No. 2 Elementary School in Ginowan, Okinawa Prefecture, stands on its rooftop on Dec. 11. The U.S. Marine Corps Air Station Futenma can be seen behind an evacuation center on the schoolyard. (Amane Shimazaki)

GINOWAN, Okinawa Prefecture--Katsuji Chinen was deeply disturbed by the sight of elementary school pupils kicking around a ball without a care in the world.

Chinen, the principal of Futenma No. 2 Elementary School, was in his office in early December when he heard the familiar buzzing of an approaching helicopter from the nearby U.S. Marine Corps Air Station Futenma. The noise became so loud that he could no longer hear the voices of the 10 or so children who continued playing in the schoolyard.

Not one of the children looked upward.

Almost exactly three years ago, on Dec. 13, a 7.7-kilogram window became detached from a transport helicopter of the Futenma base and landed on the same school ground, sparking a rash of safety measures.

But those precautions have since disappeared.

The principal is worried that children and schools in Okinawa Prefecture have become so accustomed to accidents caused by U.S. military aircraft that they are now shrugging their shoulders at the dangers.

He is now using his long experience with such incidents to press youngsters to remain on guard against the constant threat from the sky.

Chinen’s childhood home was in Kadena, Okinawa Prefecture, across from the U.S. Kadena Air Base, one of the biggest U.S. military facilities in the Far East. His father worked at a job related to the base.

When aircraft engine maintenance work started at the base in the evening, the noise was so terrible that his family members could not hear each other and halted their conversations. They resumed talking several minutes later after the noise subsided.

In 1968, when Chinen was a first-grader at elementary school, a B-52 bomber exploded during take-off from the Kadena Air Base, which was being used for missions in the Vietnam War.

The shock from the explosion knocked over a fluorescent lamp at Chinen’s home.

The family realized the danger of living there and moved to Uruma, also in Okinawa Prefecture.

When Chinen was a third-grader in 1970, he came across a burned-out automobile near the Kadena Air Base.

The vehicle had been turned upside down and set on fire by protesters angered over accidents and incidents associated with U.S. service members.

Thousands of citizens joined the demonstration, and several cars of U.S. military personnel were set ablaze. The protest became known as the Koza riot.

Chinen began working as a teacher at an elementary school in 1994.

During summer holidays in 2004, Chinen was alone in his home in Ginowan when he heard a piercing siren.

His wife told him over the phone that a large transport helicopter crashed at Okinawa International University in his neighborhood. The accident site was just 200 to 300 meters from his residence and the elementary school of his three children.

Chinen said the incident made him feel that “things are the same anywhere.”

Although he had fled from base-related risks at Kadena, Chinen could not avoid all the hazards linked to U.S. bases in Okinawa.

When the helicopter window hit the grounds of Futenma No. 2 Elementary School three years ago, Chinen was an assistant principal of nearby Futenma Elementary School. A triennial evacuation drill had just been held for just such an accident.

Over seven months, the children were forced to seek shelter more than 670 times. And in one 45-minute class one day, they had to do so five times.

Unable to use the school yard, the stressed pupils ran around indoors, resulting in at least one injury.

Starting in 2019, the school allowed the children to decide on their own whether to seek safety.

Chinen, who became principal at the school in April 2020, has never seen the pupils take cover.

Chinen believes Okinawa should be free from U.S. bases, but he never says certain facilities should be relocated first. The parents of some of his students work at military facilities, and he does not want those children to feel “responsible” for the accidents.

Chinen says he dreams of a future with no military aircraft in the skies and a society that values human life over military bases. He feels his mission is to remind children about the accidents of the past to help them prepare for and forge out their own futures.

He invited children at a nearby kindergarten to watch the annual evacuation drill in 2020 for the first time.

“The environment you now live in is not the standard,” Chinen told the symposium. “You must keep thinking of dangers that may occur tomorrow.”

A series of accidents have been reported over the past five years in Okinawa Prefecture, which is home to about 70 percent of U.S. military facilities in Japan, including parts falling from U.S. aircraft.

An Osprey transport aircraft crashed off the eastern coast of Nago in December 2016. A helicopter crash-landed and caught on fire in Higashi’s Takae district in October 2017.

A component from a U.S. aircraft was discovered on the roof of the Midorigaoka nursery in Ginowan in December 2017. A rubber piece from a U.S. chopper landed on the tennis court of Uranishi Junior High School in Urasoe in June 2019.

U.S. military helicopters have crash-landed on two occasions over the last five years off Ikeijima island in Uruma, while a part from an Osprey has also been found on the ground.

(This article was written by Amane Shimazaki and Shohei Okada.)