Japanese candles burn brightly for the spirit during the pandemic

Soothing to the heart as they burn, Japanese candles are back in the picture as their popularity surges during the novel coronavirus pandemic. 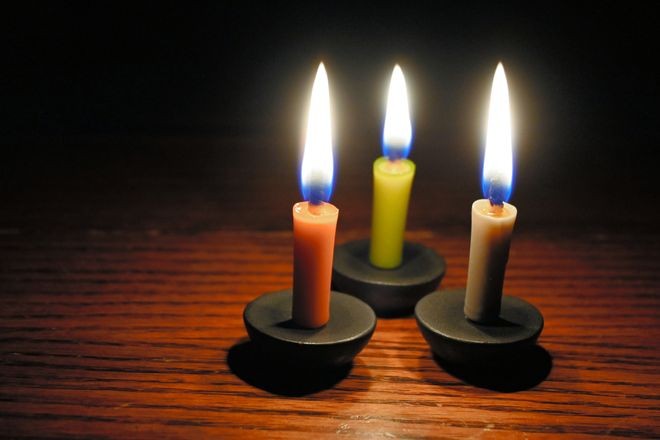 As their flame dances and flickers, Japanese candles are becoming red-hot, bringing comfort to many people isolated from their families during the COVID-19 pandemic.

“Starting this past spring, we saw a dramatic rise in the number of customers in their 20s and 30s,” said Yukie Isobe, the ninth-generation proprietress of the long-established Isobe Rousoku candle shop in Okazaki, Aichi Prefecture, visibly amazed. Tradition says her shop was founded more than three centuries ago.

The young customers are after Japanese candles. One young female broke into tears as she explained that she wanted to send candles to her parents, whom she could not visit because they live far away, said Isobe, 56.

Her shop previously had no young men at all among its clientele. It now has more than 10 young male customers who she knows by name and perhaps more whose names she doesn’t.

Japanese candles enchant onlookers as they burn. Even when there is no wind, their flame sometimes dances high and wild and sometimes dips low. But sales have been under pressure from cheaper substitutes, including Western candles.

Japanese candles produce less soot and have less wax drip along the side. They have been typically used as a handy means of lighting at Buddhist temples and on household Buddhist altars.

Western candles are made from paraffin, a product of the petroleum refining process. By comparison, Japanese candles are manufactured by applying coat after coat of sumac wax on a wick made of traditional Japanese “washi” paper and other raw materials.

Because of their original manufacturing method and original shape, their flame wavers fickly even in the absence of wind, going now so high, then so low.

A man in his 20s who is a repeat customer of Isobe’s shop said he became captivated by how the flame burns.

Living in a dormitory and sustained remote work had made him emotionally unstable. He said he felt comforted when he bought and lit a Japanese candle, which he had learned about on the internet.

He revisited Isobe’s shop in November and bought a beginner’s kit priced at 3,278 yen ($31) including tax, which comprises two Japanese candles, a candle holder, a snuffer, a wick trimmer and a box of matches. He said the kit was a present to a friend in the same dormitory who was likely also suffering from his daily life during the pandemic.

“Some of our customers have confided that they feel lonely and anxious,” Isobe said. “The sight of a flame that is at once powerful and quiet probably soothes their feelings.”

ON TABLE AT FRENCH RESTAURANT

Starting in June, each table of a full-course meal is lit by a Japanese candle at L’Effervescence, a French restaurant in Tokyo’s posh Nishi-Azabu district. That arrangement is the brainchild of Shinobu Namae, chef at the establishment, which recently was awarded three Michelin Guide stars.

“Life is so unnerving and stifling these days,” Namae, 47, said. “I hope the flame of a Japanese candle, combined with our meals, will help cure the loneliness of our customers.”

L’Effervescence uses the Nanohana, a 9-centimeter-long Japanese candle product made from rapeseed oil wax by Takazawa Candle Co., a manufacturer based in Nanao, Ishikawa Prefecture.

Namae learned about the product when he went on a trip to the Noto Peninsula, whereupon he had an inspiration about arranging naturally derived candles on his restaurant tables.

When Namae returns home after his stressful work in the kitchen, he relaxes under the flame of a Japanese candle in his dimly lit room.

Others have developed new markets for Japanese candles.

Keisuke Haze, 39, the head of Haze, a manufacturer-cum-seller of Japanese candles, opened a shop in Kawagoe, Saitama Prefecture, in 2015. “Haze” is pronounced “hah-zay” as his family name and “hay-z” as the name of his company.

He is advertising his products not so much as Buddhist altar fittings but for meditation and yoga gadgets and gift items. Haze said sales are growing every year.

Japanese candles are also drawing the attention of customers overseas.

Satoshi Onishi, the fourth-generation proprietor of the Daiyo Japanese candle shop in Takashima, Shiga Prefecture, sold about 1 million yen worth of rice bran wax candles in only 10 days when he put them on sale in the United States in 2019.

“The burn time is just right for a meditation session,” Onishi, 41, said. “Our candles are apparently being used as timekeepers for spiritual care.”

Mizuki Miyasaka, 48, a curator with the Nihon no Akari (Japanese lighting) museum in Obuse, Nagano Prefecture, said "life under bright electric lamps is more exhausting than you might think."

“It’s like the old-fashioned, orange-colored flame of a Japanese candle soothes your feelings and speaks to you personally at a time like this when you spend time alone so often,” she said.

Despite the sudden rise in customer attention, Japanese candles are being produced by only 20 or so manufacturers in the country, sources said. The Japanese candle-making industry is struggling to carve out a solid foothold for itself under the pressure of Western candles and light-emitting diode (LED) lamps.

“I will do my best, at least during my lifetime, as long as there are customers,” said Hidekazu Noma, the third-generation owner of Izutsu-ya Noma Shoten, a manufacturer of Japanese candles based in Nagoya, the capital of Aichi Prefecture.

Izutsu-ya Noma Shoten, which celebrates its centenary in 2021, has been making candles exclusively from sumac wax, derived from the berries of the sumac tree, following a time-honored manufacturing method. It has remained in business thanks to demand from Buddhist temples, of which Aichi Prefecture has the largest number of all prefectures in Japan.

But future prospects have become uncertain for Izutsu-ya Noma Shoten under the pandemic. Orders were down about 90 percent at one point because events at Buddhist temples were suspended.

“Artisans’ handmade products burn differently,” said Matsui, 72, adding that business was difficult for him in 2020, with orders from Buddhist temples down 30 to 40 percent.

But his studio is seeing brighter prospects ahead.

Matsui’s oldest daughter, Mie, 44, has become a candle artisan, eager to pass down the art to the next generation.

And his second daughter, Hihiro, 41, who has experience in accessory design, has become a candle painter. She paints flowers and zodiac animals of modern taste and other patterns as requested by customers on Japanese candles.

The most popular of all artwork candle products of the family business is the “rabbit-ear iris,” which is 19.4 cm long and is priced at 7,150 yen, including tax, per candle. The rabbit-ear iris candle is also appreciated by customers as an interior decoration piece.

“I hope artwork candles will serve as a gateway through which people outside Japan come to learn about Japanese candles,” Mie said.