Neighbors in Hokkaido object to plans to store nuclear waste 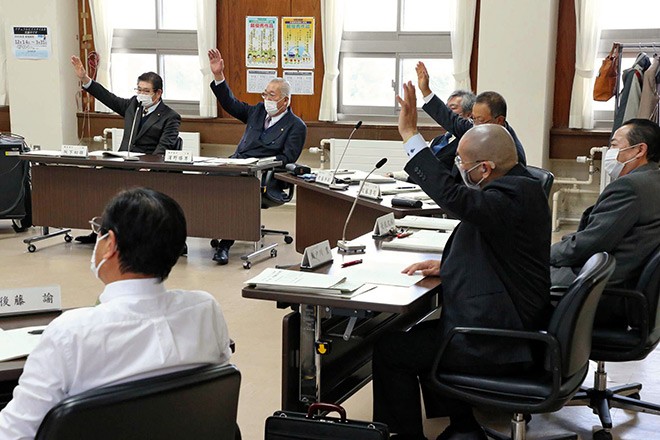 Assembly members of Shimamaki in Hokkaido approve an ordinance to ban nuclear waste from being brought into the village on Dec. 15. (Pool)

Opposition has sprung up in communities near two municipalities in Hokkaido that intend to host final disposal sites for highly radioactive nuclear waste.

However, the town of Suttsu and the village of Kamoenai have shown no signs that they will even listen to the arguments of their neighbors.

At least two ordinances have been adopted to oppose their waste plans, although they are not legally binding.

Suttsu and Kamoenai have applied to the economy ministry to host final storage facilities for nuclear waste generated at the various power plants across Japan.

The ministry had been searching desperately for years for candidate sites. After the ministry dangled out financial incentives, Suttsu and Kamoenai, both cash-strapped governments, applied.

Eager to move forward, the ministry for the first time approved the start of the first stage in the selection process, which involves about two years of studying documents and maps of seismic activity around the candidate sites.

An applicant for the first 2-year research phase of the 20-year process will receive up to 2 billion yen ($19.4 million) in subsidies.

In Shimamaki, a village west of Suttsu, the assembly on Dec. 15 adopted an ordinance to ban nuclear waste from entering the village.

Five of eight Shimamaki assembly members, including its president, submitted the ordinance. The vote was four in favor of the ban and three against, with the assembly president not casting a ballot.

Katsuo Hamano, one of the assembly members who proposed the ordinance and heads a local fisheries cooperative, criticized Suttsu Mayor Haruo Kataoka for overriding local opposition and offering the town as a candidate for nuclear waste storage.

“Suttsu was not even going to listen to (opposing voices),” Hamano said.

The second stage in the selection process is about four years of research, including taking boring samples, to ensure the sites meet general conditions for a storage facility.

“It has to be stopped completely before moving from the first stage to the next,” Hamano said.

After Kataoka in August announced that Suttsu will consider applying to become a nuclear waste facility site, town officials of Kuromatsunai and Rankoshi, which are also near Suttsu, joined Shimamaki in asking the mayor to rethink that plan.

But Kataoka did not slow down.

The three opposing municipalities are all larger than Suttsu, and plans have been broached to use strength in numbers to block Kataoka’s move.

“It is possible to scrum with other local governments that express the same determination,” Masaru Fujisawa, mayor of Shimamaki, said.

The third stage of the selection process includes the construction of a test facility.

Opposing town officials fear that municipal borders will mean nothing after highly radioactive materials are buried deep under Suttsu, and that people and the environment in the surrounding three municipalities will be affected by the waste.

People in the fishing industry in the region are also concerned about damage caused by false rumors about radiation.

The town assembly of Kuromatsunai has been deliberating a similar ordinance that was proposed in December. The assembly is expected to vote on the ordinance early next year.

The town assembly of Rankoshi will likely adopt a similar ordinance.

The waste-storage plan has also been opposed in Suttsu. Some town assembly members plan to submit an ordinance against the mayor’s idea on Dec. 17.

However, the majority of assembly members have agreed with the mayor, and the ordinance will likely be voted down.

In Furubira, east of Kamoenai, the town assembly on Dec. 15 approved an opinion paper that says nuclear waste should not be brought into the northern main island of Hokkaido.

In Shakotan, a town north of Kamoenai, some assembly members plan to submit an ordinance in March. However, the ordinance will likely not affect Kamoenai’s plan to host a nuclear waste storage facility.

The Hokkaido government in 2000 approved an ordinance that said bringing nuclear waste to the island is “unacceptable.”

But the first stage can still be carried out without the consent of local governments.

The second and third stages cannot move forward if the prefectural governor or a local municipal leader opposes the idea.

The entire selection process will take an estimated 20 years.

Kota Juraku, a professor of sociology of science and technology at Tokyo Denki University, weighed in on the situation concerning the nuclear waste plans in Hokkaido.

“Consensus-building that respects local autonomy is not a bad thing,” he said. “But proper steps must be taken, otherwise, their interests will clash and may create mutual distrust.

“Asking a third party with adequate authority to play the role of ‘referee’ is an option,” Juraku continued. “The central government and the Nuclear Waste Management Organization of Japan (NUMO) should show concrete measures as soon as possible.”

(This article was written by Kenji Izawa and Yasuo Sakuma.)