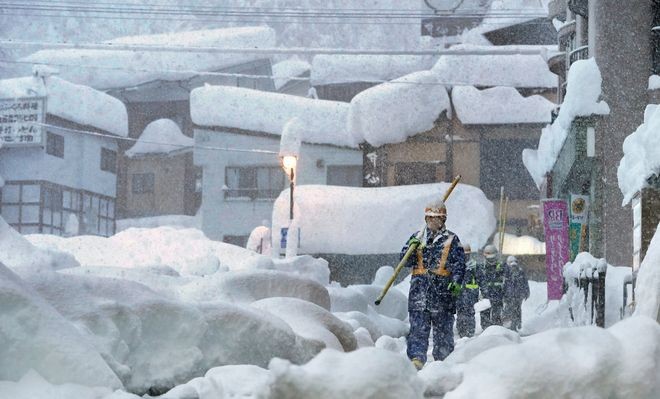 "Samui" means "it's cold" in standard Japanese. Perhaps it's just me, but the cold feels more real when someone says it in their local dialect.

"Shibareru" is used extensively in the Tohoku region. It's "sanbi" in Akita Prefecture and "saame" in Niigata Prefecture.

The entire nation is now in the grip of the season's severest chill.

News of earlier-than-usual heavy snowfall and backbreaking snow removal in Akita and Niigata prefectures turn my mind to people’s hardships that I probably will never fully appreciate from video images alone.

Bokushi Suzuki (1770-1842), an Edo Period (1603-1867) merchant and essayist from Niigata Prefecture, published a book titled "Hokuetsu Seppu" (Snow Country Tales) to tell what life in snow country is really like to people who knew nothing about it.

From the time Suzuki started planning this work, it took him 40 years to get it published in Edo (present-day Tokyo).

His struggles over the decades are recounted by Takeshi Moriyama in his recently published "Yukiguni wo Edo de Yomu" (Reading about the snow country in Edo).

Suzuki encountered a series of misfortunes, including the demise, one after another, of a number of influential literary figures on whose patronage he relied. And even after he finally clinched a publishing contract, it was not smooth sailing: The publisher pointed out the difficulty of deciphering expressions in Suzuki's local dialect.

Indeed, the product of his many years' labor is carefully peppered with regional expressions.

For instance, while people in light-snow regions refer to snow removal as "yuki wo harau" (brushing off snow), Suzuki uses the expression "yukihori," which translates literally as "snow digging."

As for the work of piling the dug-up snow in a vacant lot, it's "horiage" (digging and lifting) in Suzuki's language. The expression evokes images of huge mounds of shoveled snow.

And "yuki wo kogu" (literally, "rowing snow") means to walk on the snow in traditional Japanese snowshoes called "kanjiki."

His realistically descriptive style of writing apparently resonated with readers in the capital city, and his book sold well.

Perhaps people's interest in the weather of various regions is universal and timeless.

Even though I am not living in snow country, it's become cold enough now to brace myself a little when opening the shutters in the morning.

The wintry weather is expected to continue today. Please stay warm and safe.