SDF asked to assist motorists stuck by snowfall in Niigata 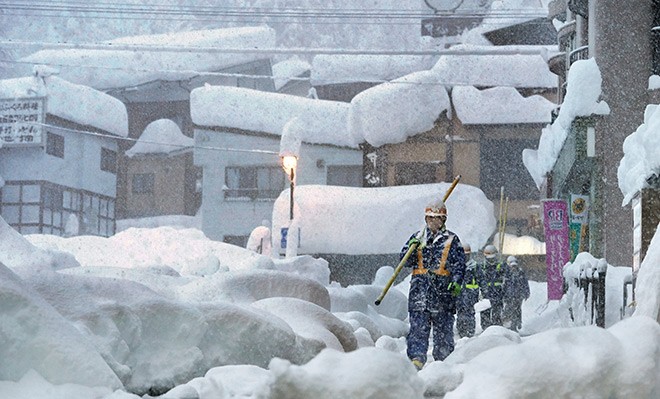 The Niigata prefectural government on Dec. 17 asked the Ground Self-Defense Force to assist hundreds of motorists stranded overnight on the Kan-etsu Expressway due to heavy snow.

SDF members are expected to be based at the Echigo Kawaguchi Service Area and distribute goods, help remove snow and rescue vehicles stuck on the expressway, which connects Niigata Prefecture and Tokyo.

From the afternoon of Dec. 16, motorists have been stranded in many areas along the expressway, according to East Nippon Expressway Co. and Niigata prefectural police’s expressway division.

The culprit is a cold air mass that hung over the Sea of Japan off western Japan, dumping massive amounts of snow from Dec. 16 to the morning of Dec. 17.

Yoshinobu Wakiya, 46, a company employee, was driving from Niigata Prefecture to his home in Kanagawa Prefecture when he got caught in the storm.

About two kilometers before Shiozawa Ishiuchi Interchange in Minami-Uonuma in Niigata Prefecture, Wakiya became stranded. He had been trapped in the car for more than 17 hours.

“I didn’t expect this much snow all at once," he said. "This is a life-or-death situation.”

Wakiya said he did not sleep at all because he had to frequently get out of the car and remove snow off the exhaust pipe to avoid deadly carbon monoxide fumes from entering the vehicle.

Some motorists around him turned off their engines to avoid their fuel from running out, he said.

“I haven’t eaten since last night, and I don’t have much water left,” Wakiya said. “I don’t have any information on what is going to happen. I am exhausted. I want to lie down and rest in a futon soon.”

As of the morning of Dec. 17, about 450 vehicles were stalled on the inbound lane of Kan-etsu Expressway from near the Shiozawa Ishiuchi Service Area, according to NEXCO East and police.

On the outbound lane, about 500 vehicles were stranded from near Yuzawa IC in Yuzawa, Niigata Prefecture.

Up to about 300 vehicles were stuck on Joshin-etsu Expressway between Joetsu Takada IC and Myoko Kogen IC.

“Cars have been stalled at many locations, and we haven’t put the entire picture together,” prefectural police said.

The Japan Meteorological Agency said the amount of snowfall for 24 hours as of 7 a.m. on Dec. 17 totaled 91 cm in Minakami, Gunma Prefecture.

In Hida, Gifu Prefecture, the snow depth reached 76 cm. In Yuzawa, Niigata Prefecture, it was 181 cm.

The agency said heavy snowfall is expected in large areas along the Sea of Japan side until Dec. 18, and called on residents to watch out for freezing of road surfaces and avalanches.

Niigata Governor Hideyo Hanazumi on Dec. 17 decided to apply the Disaster Relief Law to Minami-Uonuma city and Yuzawa town in the prefecture.

The prefectural government has set up headquarters for disaster control to deal with the heavy snow, headed by the governor.

The costs of rescuing stranded motorists and others in Minami-Uonuma and Yuzawa will be shouldered by the prefectural and central governments.